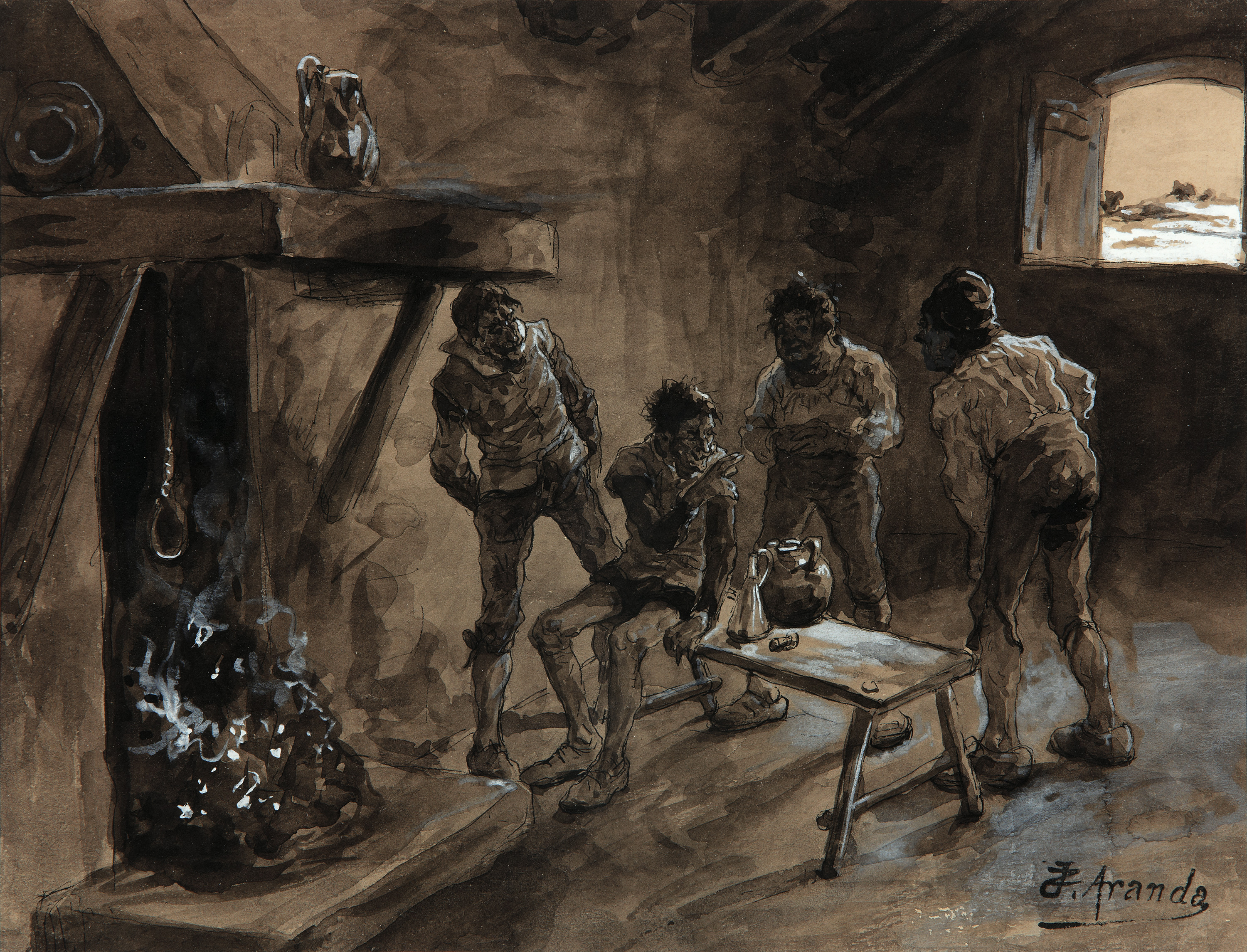 From the outset of his career this prolific Sevillian artist established an intensive relationship between painting and literature, which continued throughout much of his production.1 This can undoubtedly be explained by the fact that he belonged to a period in which literary themes were appreciated at the National Exhibitions of Fine Arts as a result of the success of the history painting from which they were derived to an extent.

His artistic training was conditioned by his learning and practice of academic drawing, of which he showed signs of mastery at a very early age. Indeed, Joaquín Domínguez Bécquer and Eduardo Cano, his prestigious instructors at the Professional School of Fine Arts, an institution organisationally responsible to the Academy of Excellence in Seville, were respectively director of drawing and instructor in the principles of drawing.

Drawing and its variants were the techniques he used confidently and skilfully in his various illustrations of literary works. In the 19th century illustration had become a purely technical intermediate stage between paper and reality or the writer’s imagination. It was the century of narrative, of history and of novels, a time when the press, magazines and books on varied themes attracted the attention of readers eager to view the actions expressed in the texts, especially if they were epic or symbolic, in drawings and graphic illustrations.

Jiménez Aranda’s illustrations are halfway between Romantic and realistic and may therefore be described as both post-Romantic and eclectic. This is because although, on the one hand, they display evident Romantic conventionalisms owing to the sentiment with which they are imbued, on the other they also share a notable objectivity derived from new ideologies and the proliferation of publications from the 1860s onwards.

Nor should we forget the painter’s experiences abroad: his stay in Paris (1881–90), which brought him into contact with French naturalism, a fact worth taking into account – albeit with reservations – when analysing some of his illustrations of literary works.

He also espoused the aesthetics of symbolism in the last quarter of the century and, lastly,the modern technical advances that ushered in the nineteen-hundreds.

Aranda, the Marquis of Salamanca commissioned the first known work on the theme of Cervantes’s novel from the Sevillian painter Antonio Cabral Bejarano. Twenty years later the artist made his first drawings of Don Quixote, encouraged perhaps by the recent publication (1863) of Gustavo Doré’s edition and with the intention of depicting, but not publishing for the time being, a more Spanish version in accordance with the universal writer’s text. His first oil paintings on canvas date from the same period.

The present illustration is based on an episode from Cervantes’s novel entitled “Don Quixote and Sancho at the inn” and is found in Part I, section 3 and chapter XVII: “Then Don Quixote recited over the cruet more than eighty Our Fathers and the same number of Hail Marys, Salve Reginas, credos, and with every word he crossed himself by way of a blessing. Sancho, the innkeeper and the officer witnessed all this…”

figures are positioned next to a rustic lit hearth, grouped around a bench, at one end of Don Quixote sits, addressing his companions. Light enters through a small window on the right-hand wall, adding to the atmosphere of expectation.