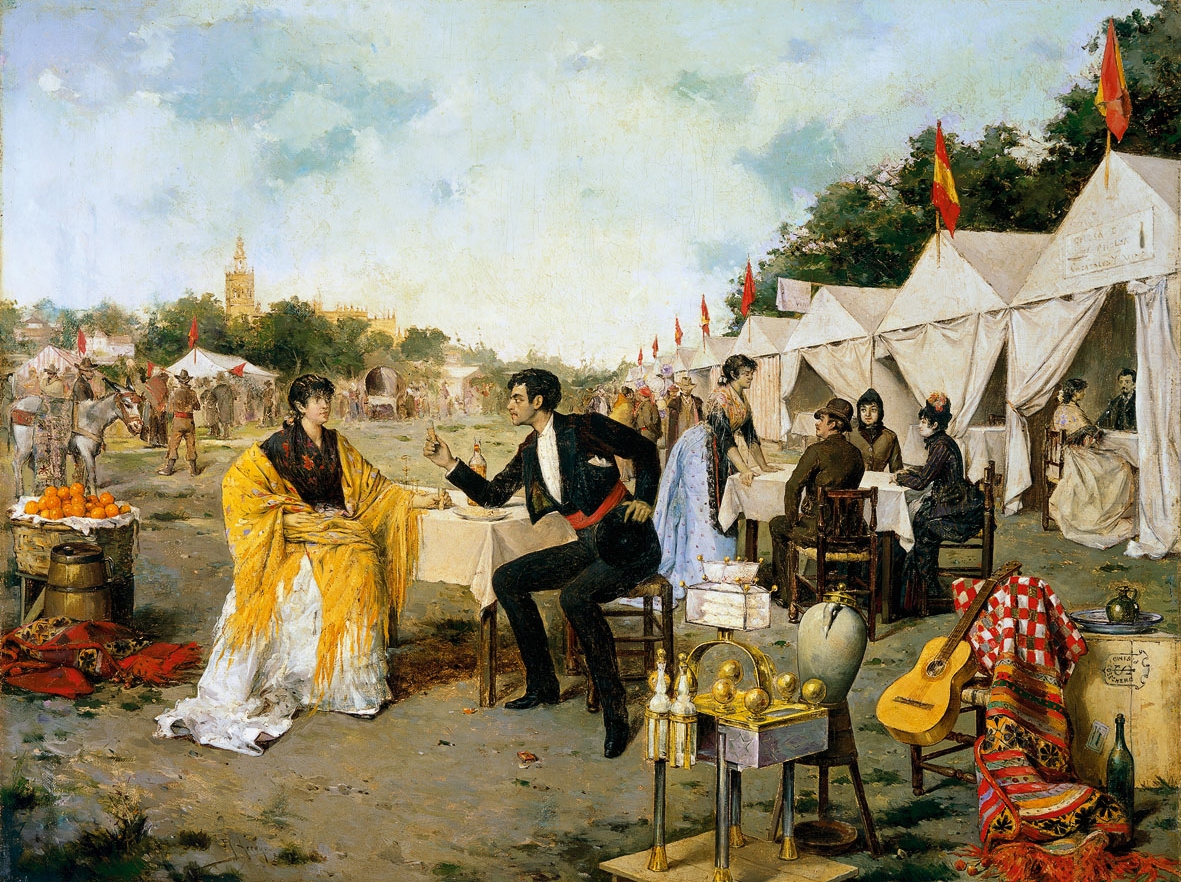 Seville Fair was one of the popular events that most caught the attention of the 19th-century genre painters. It inspired some of the most striking and appealing Andalusian Romantic paintings, of which the Carmen Thyssen-Bornemisza Collection holds several examples, some of them particularly interesting.

This picture was painted towards the end of the 19th century by Rafael Arroyo, a painter who is not very well known; an artist of rather middling talent, he attempts here to show his skills as an exquisite, careful draughtsman and in fact reveals his flair for illustration, for which he was considerably better qualified.

Indeed, instead of approaching the fair as a crowd-drawing event, Arroyo concentrates on providing a detailed description of a few figures and of the objects on the various street vendors’ stalls. On the right, in strict alignment, a row of marquees extends into the background. Most are topped with national flags except for one where wine is served, as indicated by the sign “Vino”. The first marquee also displays a hazy sign “Caracoles y vino” advertising snails and wine and inside a couple can be seen sitting at a table calmly conversing. Other passers-by, handsomely dressed in the bourgeois fashion of the day and seated at one of the outside tables, are attended to by a barmaid. In the foreground, a young man attired in the traditional traje corto suit with a short, close-fitting jacket gallantly drinks a toast with a glass of Manzanilla sherry to the girl sitting next to him, who receives his amorous compliment with an attentive gesture, cloaked in her shawl. Wagons, horses and passers-by file past another row of marquees in front of the background trees, behind which towers the Giralda, silhouetted against a cloudy sky.

The main feature of the composition – and the one which most catches the spectator’s eye – is the array of objects rendered in extremely minute detail that the painter arranges, in the manner of a still-life painting, among the groups of people. On the far right of the immediate foreground are a ceramic plate and a small ceramic flask on a wooden crate bearing the stamp and emblem “P. Simó. cosechero”, beside a chair on which a guitar and some saddle blankets lie. Particularly curious and appealing are the pots and pans laid out beside them belonging to the stalls selling water, sugar lumps and brandy: the metal vessel with a foot contains the cool water; the bottles of brandy are displayed on the picturesque tin and brass rack; and inside the glass receptacle on top of it are the sugar lumps that were dissolved with both beverages to make one of the most popular refreshments sold on stalls in 19th-century fairs, avenues and parks. Further away on the opposite side is a stall selling oranges, also a popular refreshment at public celebrations. Lastly, the main figures – the couple who, given the shortage of customers, have left their stalls unattended to engage in courtship – appear to have a narrative intent, albeit tinged with pure anecdote.

Arroyo uses a rather forced and conventional perspective to frame the open ground of the fair, causing the vanishing lines to converge in the centre of the canvas, and displays a certain lack of mastery of the proportions and joints of the figures. Even so the painting effectively fulfils the decorative purpose of its picturesque theme with its vivid, albeit rather flat colours and heavily drawn outlines executed with an intentional realistic virtuosity that displays greater suppleness in the small figures and trees in the background, precisely because they are rendered more spontaneously and with less emphasis on detail.