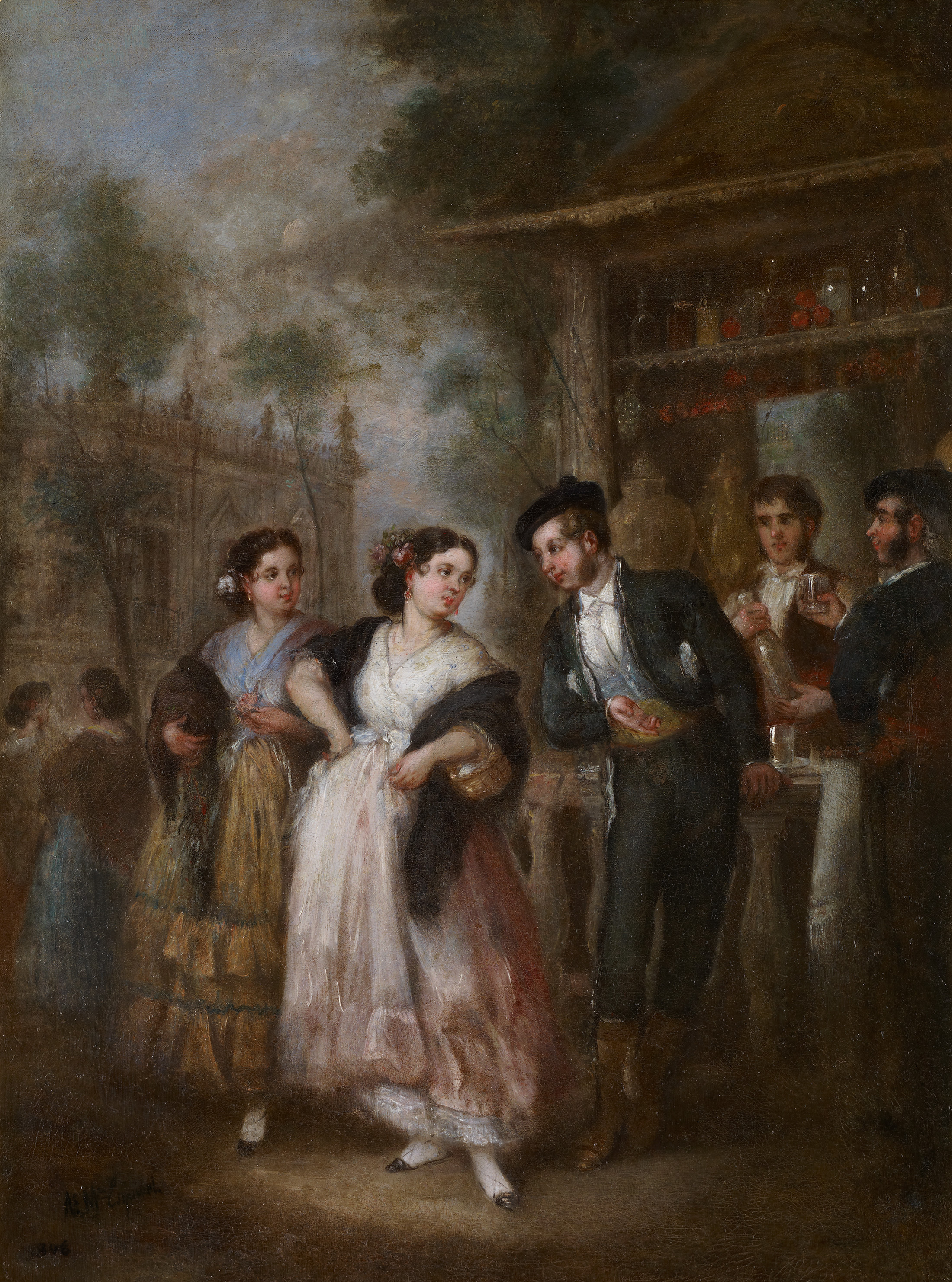 On passing a water seller’s stall, two young women are courteously greeted by a young man who beckons them to accompany him to have a refreshment. With a gesture that is intended to be sophisticated, the suitor, with bushy mutton-chop sideburns and a smart traditional Andalusian suit with short, tight-fitting jacket – details that underline his typically Spanish appeal – points to the glass the water seller has just served him. Meanwhile, his companion appears to drink a toast to the girls. The girls, laden with baskets and typical earthenware from the city and embodying the most traditional and archetypal iconography of Sevillian women, stop to glance at their suitors with a gesture that verges on brazenness.

The scene is set by one of the characteristic stalls that provided refreshments to passers-by until well into the 20th century. The background of the composition suggests that the setting is perhaps the famous Plaza del Triunfo in Seville in the vicinity of the cathedral, just outside the well-known district of Santa Cruz. The detailed description of this square, which was depicted shortly after 1850 by the French painter Achille Zo (1826–1901) in a painting entitled The Cathedral from the Plaza del Triunfo (Bayonne, Musée Bonnat), recreates an architectural silhouette similar to the one evoked by the background of this other painting. The building visible in the present painting could be identified as the east corner of the exterior of Seville cathedral. The presence of several holm oaks in both paintings reinforces this identification. By the mid-19th century the square, delimited by some of Seville’s landmark buildings such as the cathedral, the old Lonja building converted into the Archivo de Indias and the Reales Alcázares, had become one of the most popular parts of the city of Seville for strolling. Zo’s painting confirms that the square, lined with trees from early times and paved since 1848, was also populated with water stalls like the one depicted here. These stalls provided cool water, which Sevillians particularly enjoyed when it was sugared and scented with orange blossom, sour grape juice, fresh must or orange – varieties of fruit alluded to in the painting by the presence at the top of the canvas of several oranges and a bunch of grapes that hangs on the left, in the dark interior of the makeshift construction. This pleasant and relaxed atmosphere must have been conducive to courting scenes like the one depicted here, whose visual recreation accords with the anecdotes about the intensity of amorous conduct in Andalusia found in some travel books of the mid-19th century.

This painting appeared on the art market as an original work by the Sevillian master Antonio María Esquivel (1806–57) owing to a signature that is apocryphal by all accounts. In fact it cannot be held to be by this artist for strictly stylistic reasons, as it is not at all consonant with Esquivel’s well-known manner of painting. What is more, the realistic and descriptive treatment of the anecdote appears characteristic of a younger generation that produced fully natural scenes of this kind that Esquivel rarely cultivated. The style and quality of the painting are consistent with those of José María Romero y López, a prolific Sevillian painter who admired José Gutiérrez de la Vega (1791–1865). Romero is well known for his many portraits of the Andalusian bourgeoisie and fairly highly regarded for his religious compositions, some of which vividly recall Murillo. However, critics have often overlooked his interesting and no less prolific facet as a painter of genre scenes, which are very sparsely represented in Spanish public collections. These works are characterised not only by their formats, which are similar to that of the painting in the Carmen Thyssen Collection, but also by their very similar treatment of the theme, featuring many courting scenes with well-known Andalusian monuments as backdrops. Romero’s best known style is furthermore recognisable in this work. The full, fleshy faces with small, lively features are characteristic of his entire output, as can be seen in the other painting attributed to the painter in the Carmen Thyssen Collection, A Public Bath (CTB.1995.187). The simplified handling of the vaporous effects of the fabrics of the two girls’ dresses, which can be appreciated despite the surface abrasion of the canvas, and the use of pearly glazes and greyish tints unmistakeably point to the art of Romero.