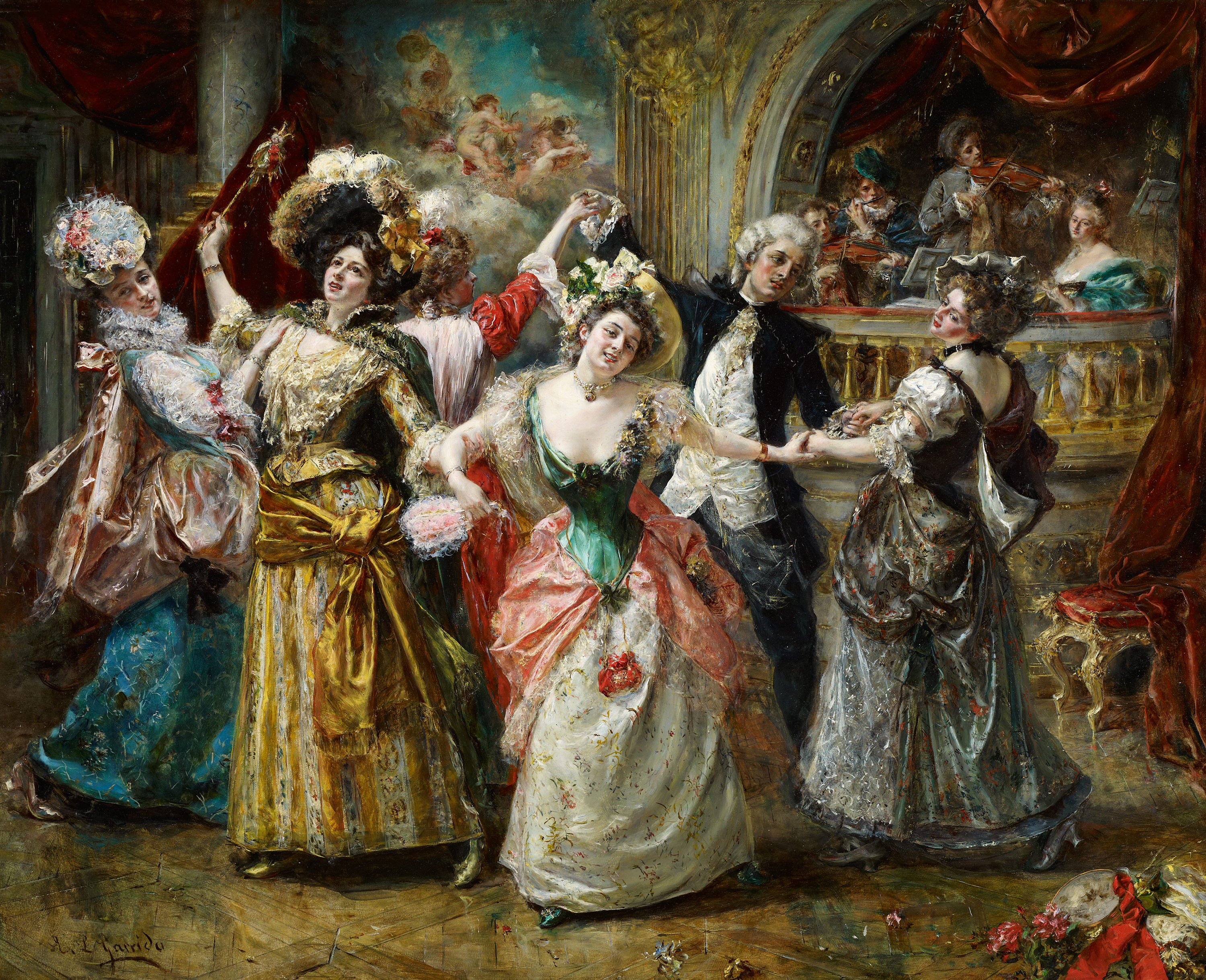 The Beau at the Soirée

The arrangement of the women in the foreground in a circle with their hands linked to justify the ensemble that prompts the theme in this panel underlines the irony in the title (the double meaning inherent in the ambiguity of the scene) when we consider the position, behind the group, of the only gentleman. A fop with feeble gestures and a bland look, he is upstaged in every way by the dynamism and brimming sensuality of the ladies, especially the one at centre, who leads the dance. Changing the title from "Beau of the Soirée" to "Cock of the Coop" might best underline the mockery implicit in this painting. The dancers are framed by the box in the background at right – where another male figure can be seen with ladies looking on – and the pictorial adornment of the left half with the usual large panneaux that covered excessively ornate Rococo rooms. Here we are reminded of the Frick Museum's re-installation in New York of Jean-Honoré Fragonard's (1732–1806) series of paintings The Progress of Love (1771–73 and 1790–91). Involving himself with 18th-century aesthetics as regards colour, Garrido returned to the range of cold but sumptuous tones, concentrating on drapes in salmon-pinks, yellows, golds and bright, radiant almost sky-blues which, together with the whites and their greyish reflections, form – as with the juxtaposition of the colours of the flowers of the ladies' hats – that kaleidoscopic sparkle, that accumulation of lustre and reflections which the ancient scholars described as "coruscating" and is so characteristic of Rococo (even if here the effect appears somewhat frozen).

Set, then, to Rococo surroundings this dance scene is basically yet another variation of a theme which the painter exploited fully. Some experts have situated this painting within Garrido's production of the 1880s, citing by way of example The Minuet, for which, according to palace records, the painter made bozzetti of interiors at Versailles and Fontainebleau.

Indeed, the female figures' hats (adorned with flowers) and dancing postures in The Beau at the Soirée are quite similar to those in another of Garrido’s paintings, The Masked Ball. Furthermore, in it, the woman at the centre of the composition, in 18th-century dress with a salmon-pink skirt and a green and blue bodice, is almost identical to the one at centre in The Beau at the Soirée, the only variation being the position of the arms. The dandy in the dark dress coat and typical white curly wig also appears in both paintings, although the one here is not wearing the same black cocked hat as the one in The Masked Ball. Although the backgrounds are clearly different, the effect of the box at the theatre is maintained, as is the arrangement of the figures in both "dance" paintings.

At this point we might mention the similarity with another of Garrido's paintings, The Dancing Lesson, where once again we see the same type of male figure, in this case the dancing master, who in similar 18th-century surroundings dances with a young woman with garments, porcelain features and other accoutrements all of a very Rococo aesthetic. In this case, however, he used other compositional resources: the figures are arranged in another manner and the architectural framework is different, reflecting, although in a more pleasing, miniaturist way, those colonnades present in paintings from the first half of the 18th century – that classicist-based Baroque style (restrained yet scenographic) seen, for instance, in the work of the Italian Sebastiano Conca or the Frenchman Louis-Michel van Loo, in an aesthetic equivalent (to name names) to that of the architect Sabatini. In this context, we might also cite ¿Me concede este baile? ("May I have the Pleasure of the Next Dance?") which includes the same recreational procedures as in this kind of painting, albeit in a different scene.

Although not dance scenes in the strictest sense, Garrido sometimes portrayed themes connected with dancing, as for example Dressing for the Ball (often reproduced in on-line information on art auctions or plate or poster sales), in which the same Neo-Rococo atmosphere is recreated in an again excessively ornate interior full of those same old panneaux representing 18th-century Rococo painting. The main female figure wears a hat and flowers in her hair identical to those in the painting in this catalogue; her clothing is also very similar, although more luxurious, and her pose is the same in that her head is tilted to one side. As for the male figure characteristic of all the paintings we have discussed here – and obviously including The Beau at the Soirée – in this case he sits in the foreground to the left, keeping the lady company (we suspect rather as a chevalier servant), while she prepares for the ball.

The well-known, prevailing trend of 18th-century type tableautin had been introduced into Spanish painting as one of the facets of the "Louis XV" style all the rage with the Neo-Romantics during the Second Empire (Napoleon III). The success of that pictorial fashion has also been explained as a vindication – at a certain time in 19th-century France when the realism of such writers as the Goncourt brothers or Balzac was on the rise – of 18th-century Rococo themes.

The Beau at the Soirée