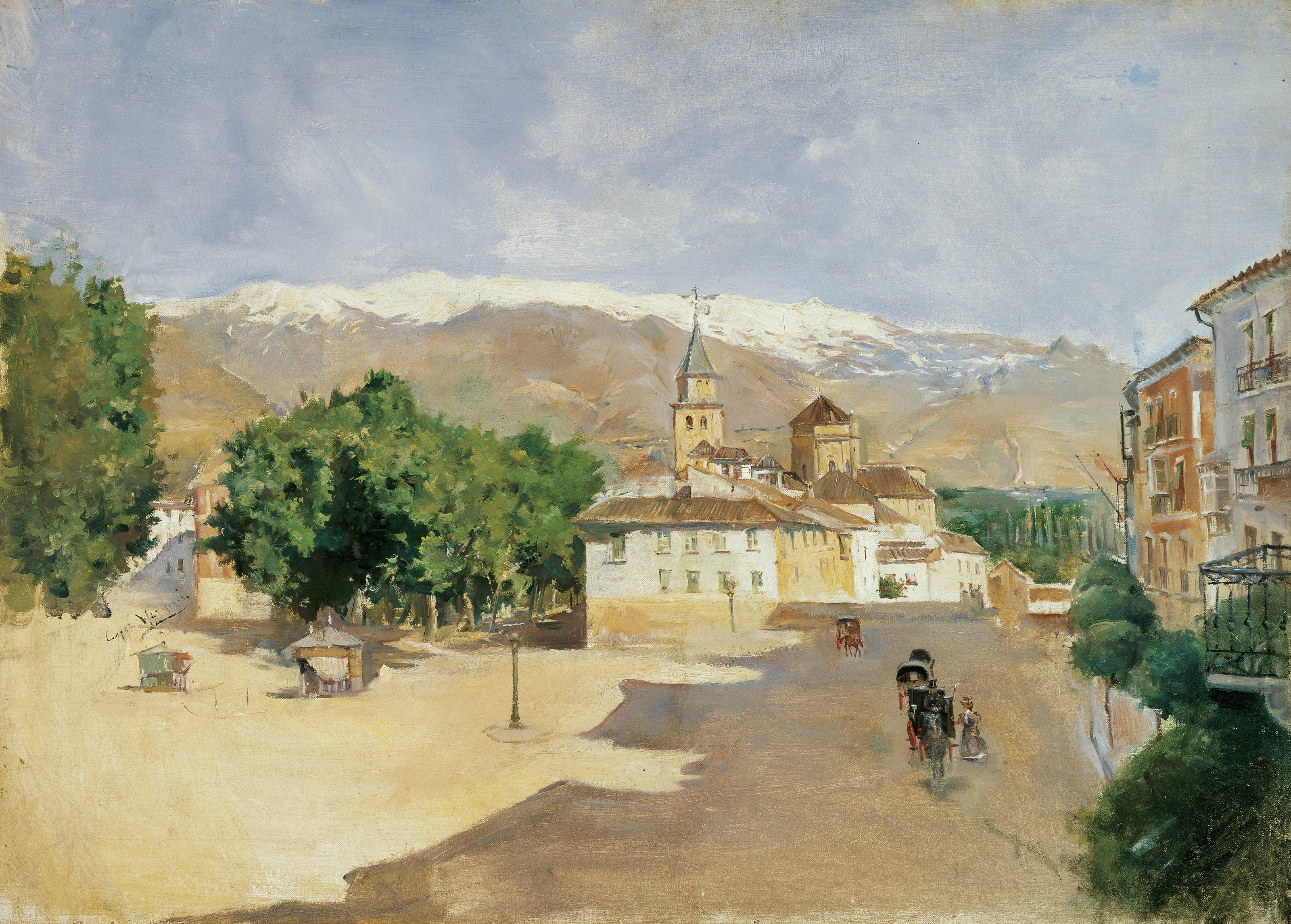 Like many artists of his generation, López Mezquita began as a landscape painter. Landscape painting became deeply rooted in Granada throughout the 19th century, having been boosted by the "discovery" of the city in the decades of Romanticism by travellers and foreign artists who, with a greater or lesser degree of accuracy, constantly painted it. This gave rise to a practice in which the publisher McMillan commissioned artists such as David Roberts, Kroyer, Josephson, Dietrichson, Joseph Pennell and Henri Regnault to illustrate Washington Irving's Tales of the Alhambra. The Granadan painters of the late 19th century thus became heirs to an ancient and precious legacy: that of the contemplation of the city since 1800. Indeed, the streets of Granada received visits from Regnault (1869), Martín Rico (1871), Fortuny (1871–72) and, at the end of the century, Muñoz Degrain, Rusiñol, Casas and Regoyos. The city actually created a school of artists who lived and breathed plein air painting.

López Mezquita began studying landscape painting by making studies of the Granadan plain and, naturally, the province's most acclaimed monument, the Alhambra. Several canvases – including The Court of the Myrtles (1904) and The Court of the Grated Window (1905) – still exist.

Also dating from 1904, The Embovedado is a view of the city in which many elements harmoniously merge and interrelate. There are buildings, such as the iconic Basilica of Our Lady of Sorrows with its towers and transept; the ochre vaulted esplanade (with its scant street traffic) that gives this area its name – "the Embovedado" – and covers the River Darro as it passes through the town; and the leafy Paseo de la Carrera boulevard with its almost ubiquitous view of that glorious backdrop of the mountains with their snow-capped summits that makes the city not only special but unique.

Indeed, where town-planning is concerned, there is a clearly descriptive element in this composition. It can even be considered an extremely useful document, giving as it does one of the last views of that city of Romantics which had so fascinated travellers and was now beginning to fade. Some years later, Regoyos would provide a picture of the far-reaching changes which that part of the city was experiencing in two beautiful paintings: Derribos ("Demolitions" – 1910) and Puente de las Angustias ("Bridge of Sorrows" – 1912). But this canvas is not only of documentary – indeed almost topographical – value, for above all else it has about it something of the exaltation of light, of managing to capture a certain time of day achieved, of a merry tale told at noon just before the coming of summer, with the stillness and rather tense tedium of a beautiful provincial city engrossed in contemplation of itself, and, as Gavinet said: "The contemplation of which will be imprisoned in so tight a circle."

López Mezquita did not follow the path of landscape painting throughout his prolific career. For reasons not necessary to mention here, he was soon to become one of the most important and sought-after portraitists of his time yet he peppered his career with occasional incursions into genre painting. Whatever the case, he left behind, anchored in the past forever (with the odd exception at the end of his life) the theme of the landscape – which makes this painting of greater interest still.