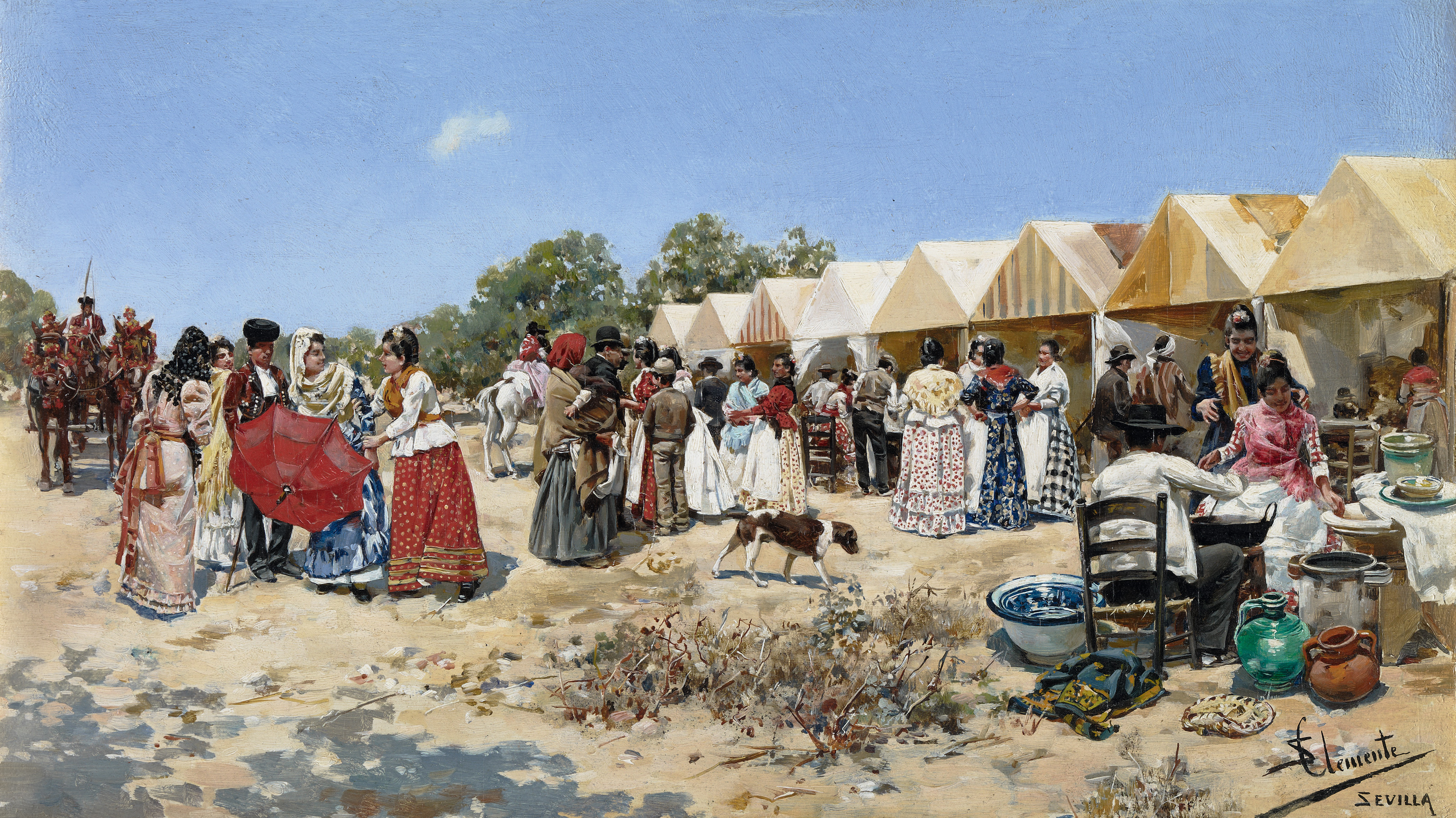 The scene, which takes place outdoors in a characteristically Andalusian setting, conveys the bustle and activity of the figures – chiefly female – engaged in observing the attitudes and conduct of the locals. They are arranged in small scattered groups such as that on the left-hand side where the newly arrived woman in a white mantilla is about to close her red sunshade. She appears to be hurried along by the woman on her left, who seems eager to introduce her to the ritual of contact with the neighbours at these gatherings or, at least, to share observations and comments on everything that might attract their attention. That the left-hand side is the point of introduction to the scene is confirmed by the horse-drawn carriage behind the people that is about to take new onlookers for a ride or drop them off. Another even more striking group in the right foreground, consisting of people sitting on typical wooden seats and surrounded by all kinds of earthenware and clay vessels (who appear to be cooking some kind of stew for lunch), forms a slight diagonal with the previously described group. This diagonal almost converges in this corner of the painting with a much more pronounced diagonal formed by the vanishing line of the canvas tents (a linear perspective as a geometric device) and it is this line that lends the composition its depth, which is reinforced and extended at the more open end by the row of trees in the background. There is evidently a greater agglomeration in the area of the tents which, aligned and with a uniform external appearance, recall one of the most characteristic themes of bustling outdoor activity, that of the fairs and, in particular, the April Fair of Seville with its marquees. The predomination of whites in the outermost marquees, reinforced by the whites of some of the aprons, blouses, shirts and bodices, seeks to achieve a luminosity that enlivens the duller shades or at least the predominant yellowish tone of the sand on the ground.

The work can be traced on the internet – with the same title – on the websites of auction houses, which document the sale that took place at Sotheby’s New York on 23 October 1997, when it was acquired by its current owners, as recorded in the full catalogue information for this small painting. As for the subject, 19th-century Andalusian genre painting by no means shunned the themes of markets and travelling salesmen that provided so much local colour and a pretext for painting outdoor scenes. It does not fit particularly well into the category of “markets, street vendors and craftsmen” established for this theme in an urban outdoor setting and as a depiction of daily life in Andalusian painting. However, a few other paintings by Clemente such as La recova (“the purchase of eggs, hens and other similar items” or, according to its second meaning, “public place where hens and other domestic poultry are sold”, according to the Diccionario de la Real Academia Española), which could even fit in with the third meaning of the word (in Andalusia, “stone or brick roof used to shelter a few things from a storm”) judging by the illustration (Quesada, Luis: La vida cotidiana en la pintura andaluza. Seville, 1992, p. 192, fig. 193), can be said to match the theme of “markets, craftsmen and street vendors” reported in this publication (ibid., p. 301).

Furthermore, according to sources – or, to be more precise, the almost contemporary documentation (Cascales y Muñoz, José: Las Bellas Artes Plásticas en Sevilla. La pintura, la escultura y la cerámica artística. Toledo, 1929, vol. I, pp. 220–24) – his works include “two panel paintings representing Recuerdos de la feria de Sevilla (“Souvenirs of Seville Fair”) sold in London to Mr Arthur Tooth” (ibid., p. 224). Also cited – among other titles of genre themes – is one of Costumbres andaluzas (“Andalusian Customs”) that was “purchased for Berlin” (ibid.). The impossibility of matching with certainty the titles provided at the time with the paintings known and reproduced today prevents us from going any further in this process and from attempting to draw any kind of conclusion on the accuracy of this ambiguous title of Market Day.

Nevertheless, it may be feasibly deduced that the panel painting in question must have been executed after Clemente’s stay in Paris (where he joined the circle of Léon Bonnat and Francisco Domingo Marqués, paying the inevitable tribute to the so-called “dress coat painting”, the Spanish version of the tableautin). That is, it was painted after 1880, the year he returned to Spain and settled permanently in Seville, producing paintings of themes from everyday life in Andalusia in a somewhat precious style. One such painting is Para el Mercado (“To the Market”) measuring 62 cm high x 90 cm wide and listed as no. 249 in the National (called “General” this particular year) Exhibition of Fine Arts of 1897 (Madrid 1897, p. 41), for which he was awarded an honorary mention with ten votes (like the rest of the prize winners), the highest and only award he obtained for the only work by him shown on what was the only occasion he took part in an official competition of this kind.