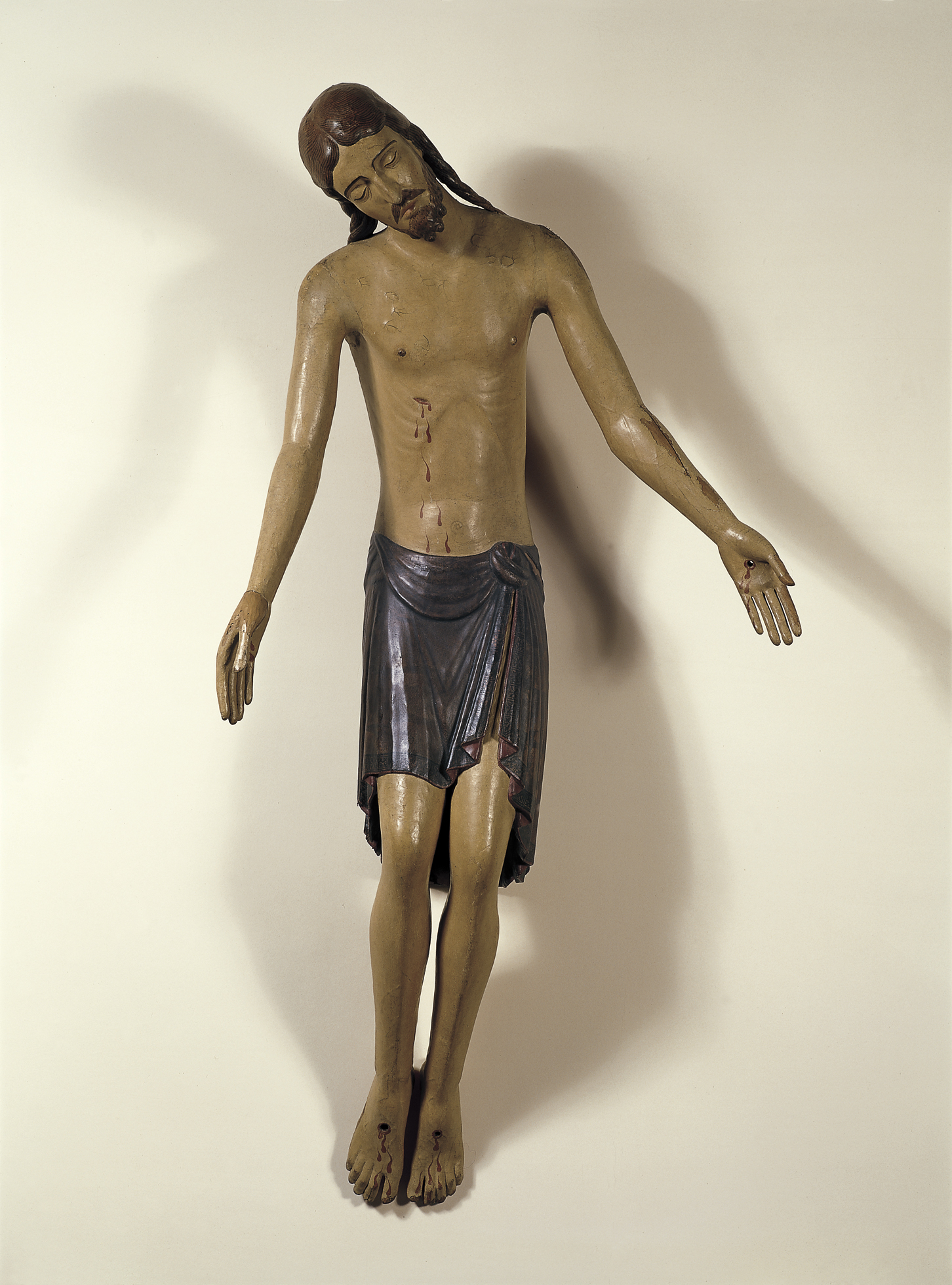 The Carmen Thyssen-Bornemisza Dead Christ would originally have formed part of a group showing the Deposition of Christ, probably with four flanking figures at the foot of the cross – the Virgin, St John, Joseph of Arimathea and Nicodemus. A complete example of a Deposition group is still preserved in the cathedral at Tivoli, and the Thyssen-Bornemisza Christ is closely similar to the Christ of that group: the perizoniumor loincloth is similarly arranged in both examples and the facial type and the hair are close in style. It is probable that the right arm of the Christ was originally further from the body in a more open gesture, so that the pose would have even more closely resembled that of the Tivoli group. Jean-René Gaborit, in an article on a similar group to the Tivoli Deposition acquired by the Louvre in 1967, formed a small group of sculptures which he felt came from the same workshop; this group consisted of the Tivoli and Louvre ensembles, a Dead Christ in the Galleria Nazionale dell’Umbria in Perugia, anotherChristin the Castello Sforzesco in Milan and a fragmentary figure of Joseph of Arimathea in the Stoclet Collection in Brussels. Gaborit illustrated the Thyssen-Bornemisza Christ in his study, but considered it to be “a faithful and heavier copy of those of the ‘Tivoli workshop’: same hair, similar loincloth, but the proportions are less fortunate and the joints heavier”. However, the similarities with the rest of the group are more marked than the differences, and it seems sensible to include the Thyssen-Bornemisza Christ with the other pieces.

Comparing the Thyssen Christ with those at Perugia and Milan, it is immediately apparent that they are intimately linked. As with the Tivoli Christ, the perizonia are very similar treated (although the Milan Christ has a curving edge at the front of the perizonium) and the general bearing is remarkably close. The arrangement of the hair on all three examples is very similar, the Milan Christeven retaining the dark brown lines to indicate the hairs on the head, and the beard, with its curling ends, is virtually the same. Another feature which links the Thyssen-Bornemisza and Milan Christs is the painted decoration around the lower edge of the perizonium, in the form of a patterned border.

It has been proposed by Gaborit that the workshop responsible for producing the pieces in this group probably operated in the area of northern Latium and Umbria, possibly travelling to the churches where their sculptures were erected. This is reinforced by their provenances: the Tivoli Depositionwas made for the cathedral there, the Perugia Christ was formerly in the abbey at Roncione, and both the Paris and Milan sculptures were on the art market in Rome at the beginning of the century. Their dating is helped by the fact that an inscription at the foot of the Perugia cross, although dating from the 18th century, gives 1236 as the time of its execution.3 Given that the above-mentioned group has such a close family resemblance, it is unlikely that they are divided by more than one or two generations, and their time span would therefore fall within the years 1220–60. It does not seem possible to be more precise than that, and Gaborit's stylistic progression of the Tivoli Deposition first (1220–30), followed by the Paris group (1230–40) and finishing with the Milan Christ (1240–50) cannot be considered final. Because of its close similarity to the Perugia and Milan Christs,it seems reasonable to date the Thyssen-Bornemisza Christ within the date bracket 1230 to 1250.

It has not proved possible to reunite the present Christ with any of the members of its erstwhile ensemble, which are now presumably lost. Several figures, obviously Central Italian and of the first half of the 13th century, now divorced from their ensembles, do exist – for instance a Virgin and St John in the Musée de Cluny in Paris, the already mentioned Joseph of Arimathea in the Stoclet Collection and two figures in the Acton Collection in Florence – but they cannot be linked with any of the isolated Christs previously discussed.

The Thyssen-Bornemisza Dead Christ, in its restored state, is a sculpture of the first importance for the history of Italian medieval wood sculpture.