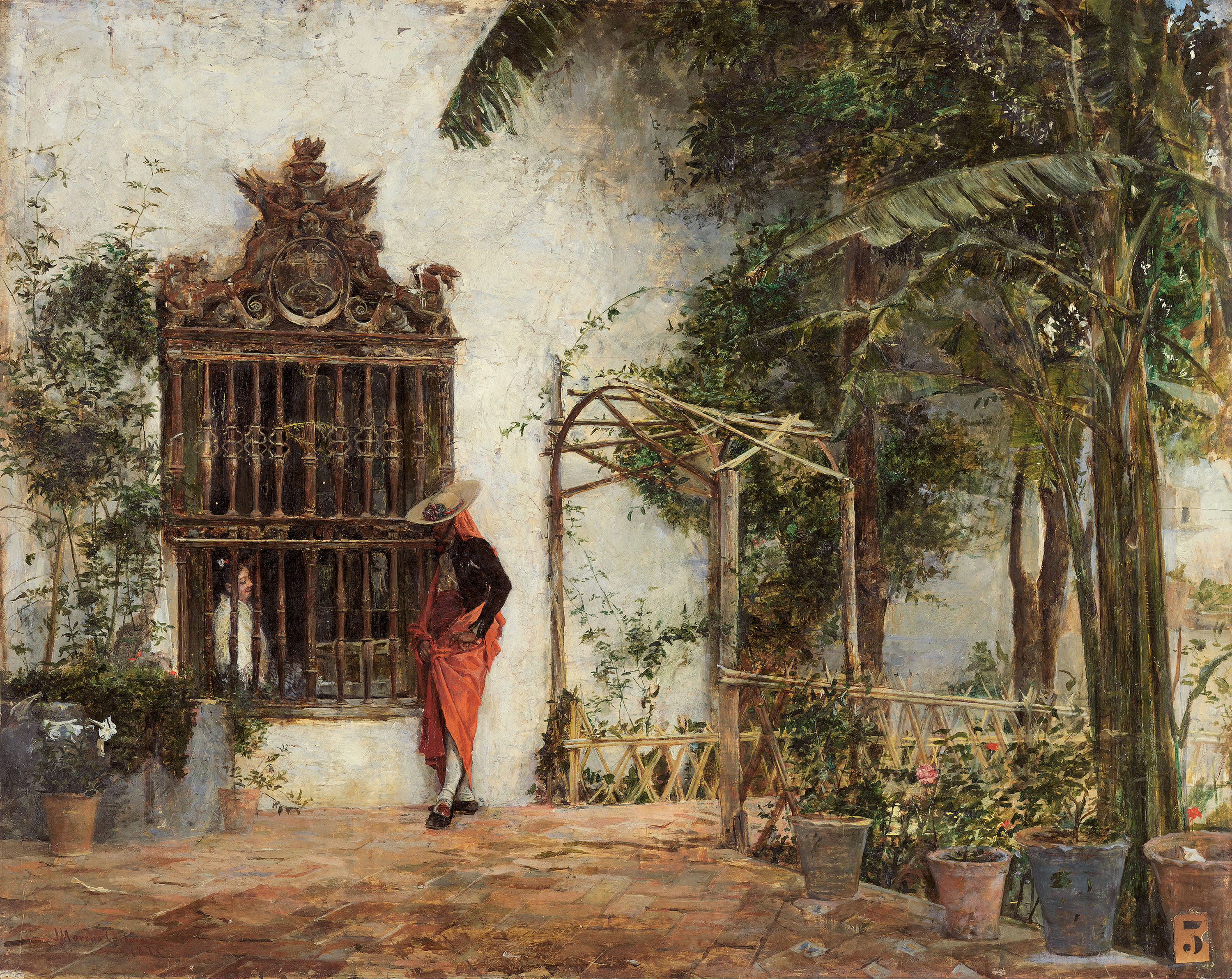 Courting by the Window Grille

Moreno Carbonero may be regarded as the Malaga painter of greatest national and international renown. His career was meteoric from the outset as he enjoyed the firm support of Bernardo Ferrándiz, who singled him out from his colleagues at the School of Fine Arts when he was barely more than twelve and had begun to paint.

His career is replete with prizes and he is represented in the best European collections, both public and private. He is also considered the portrait painter of the European nobility and haute bourgeoisie, on a par with Sargent or Boldini.

Like all the painters of his day who chose to go down the route of official commissions, he espoused an eclectic style, which he practiced with mastery, especially in history painting but also in other genres except for a few portraits executed in a fairly proficient realistic style. This choice stemmed not only from opportunism but also from his convictions, as his main reference was Fortuny.

Ferrándiz’s devotion to Fortuny and efforts to establish his style of painting in Malaga are well known; these efforts paid off, as it is unusual to find a local painter who did not, at some point in his career, follow the fashion for the small genre scenes or tableautins known in Spain as “dress coat paintings” owing to the garments worn by the figures – even Muñoz Degrain. Fortunately the type promoted by Ferrándiz was not the excessively commercial variant of the tableautin, but a depiction of air and light, captured on canvas with the precision of a miniaturist’s brushwork.

Moreno Carbonero could not resist its appeal and devoted the first decades of his career practically entirely to genre painting, though he did not depict “dress coat” scenes but drew inspiration from daily life or from scenes from Golden Age literature, especially Don Quixote.

The present work is one of the very few catalogued examples from these early years in his career.

The theme and technique indicate that we are dealing with what may be classified as the first stage in his production, when the influence of Ferrándiz and, accordingly, of Fortuny is more direct. Indeed, the reverse of the panel bears the inscription: “cuadro orijinal [sic] de J. Moreno, discípulo de la Escuela de B.A. De Málaga y de D, Bdº Ferrándiz / 1874” [original painting by J. Moreno, pupil of the Malaga School of Fine Arts and of Mr Bdo. Ferrándiz / 1874].

The note appears to be written by the painter himself, who was known as “Pepito” Moreno during those years and signed his works as “J. Moreno”, as he also shows respect for his master, to whom he refers as “Don Bernardo Ferrándiz”.

The work bears a certain relationship to another executed the following year in Seville, where he spent the year furthering his training by visiting the local museums and making copies of works housed in them. The Marquis of La Paniega, president of the Royal Academy of San Telmo in Malaga, financed this stay.

This other painting, Patio sevillano (“Sevillian Courtyard”), now in the Museo de Málaga, shows an Andalusian courtyard rendered very similarly to the right part of the work in the Carmen Thyssen Collection. In both, a wooden structure acts as a trellis in the shape of an arch leading to a path surrounded by pots, poplars and banana trees. There is no doubt that Patio sevillano is a study of lights and an experiment at painting from life, whereas Courting by the Window Grille is more restrained and executed with a different intent, more dependent on models in which technical preciosity is more present.

Indeed, technique is the main feature of this painting, with fine, precise brushwork that describes each millimetre of the panel’s surface lovingly and accurately.

The subject of the painting is a recurring theme in the scenes of customs, in this case Andalusian, that were greatly in demand: the rite of passage of marriage, which begins with courting.

In Andalusia this sequence is also called “pelar la pava”, a popular expression that refers to the conversation engaged in by the couple, separated by the grille of the window through which the young woman looks out, as required by decorum.

Moreno Carbonero’s interpretation of the scene is steeped in historical iconographic references as if to demonstrate an academically-rooted artistic culture, expressed here in the suitor, who is depicted in contrapposto in order to emphasise his figure and with his cloak gathered in the manner of a toga.

The girl, who is seated, engages in conversation in keeping with the rules of modesty established for female conduct, and the grille, a splendid example of 17th-century decorative arts, could be based on a real grille of a noble Andalusian home. This detail accentuates the lifelike nature of the scene and incorporates the language of realism.

The composition of the painting also complies with academic rules, as it is divided into two areas in which the red of the cape is balanced by the greater weight of the area of vegetation on the right.

The rite is sublimated by the respectful distance surrounding the grille, which acts as an altarpiece with its magnificent crest, thereby sacralising a custom and a territory.

This interesting work provides an insight into the ideas of the great artist Moreno Carbonero.

Courting by the Window Grille