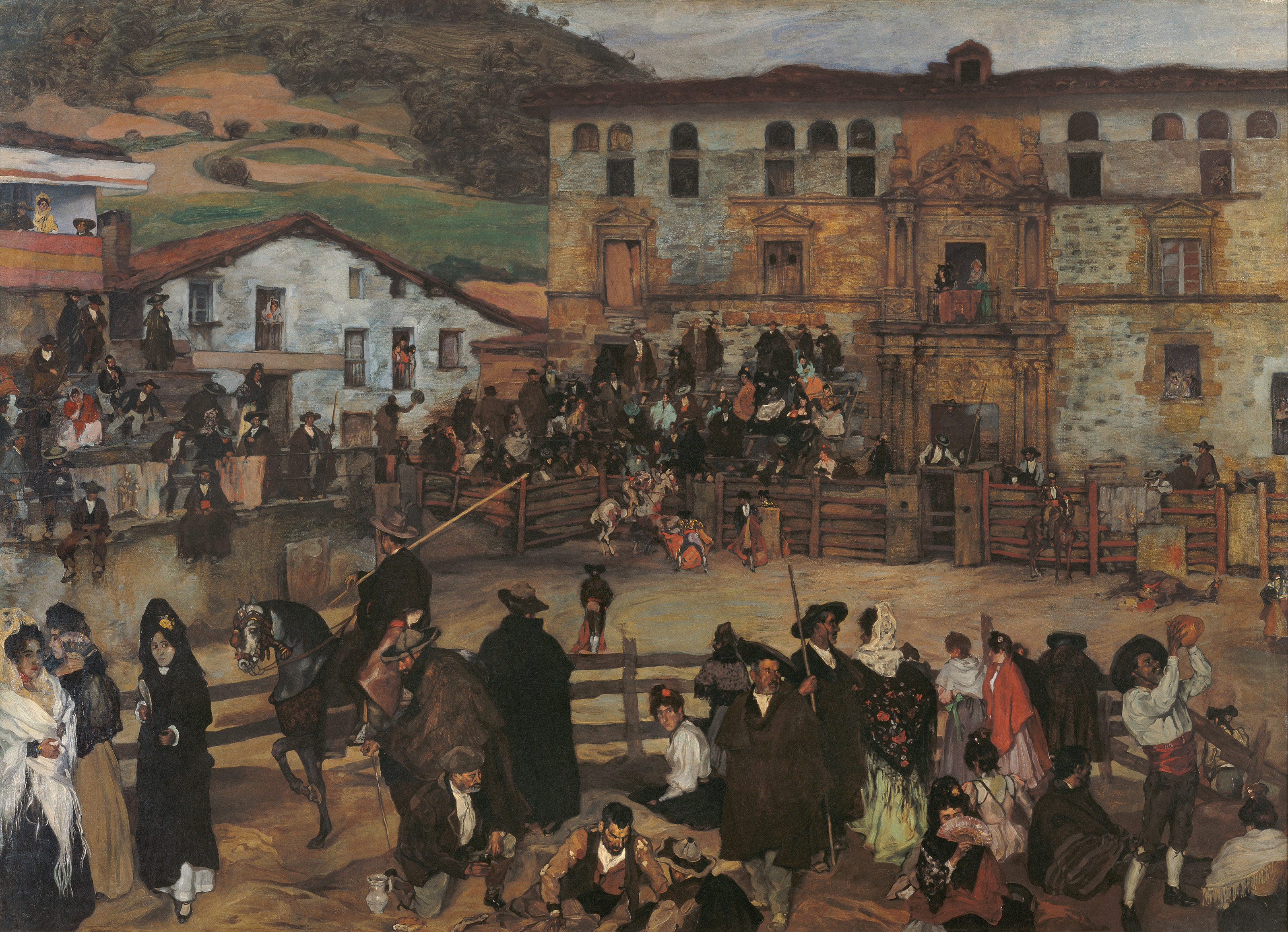 This spectacular canvas is of very special importance in the production of the young Ignacio Zuloaga, and for many reasons. It depicts a bullfight in front of the monumental Plateresque façade of the mansion in Éibar known as the Palacio de los Orbea (also called the Palacio de Unzaga y Torre Sarra), until it was demolished in the early 20th century.

During a visit to his home town in 1899 to get married, Zuloaga had painted an extremely interesting study from life of this square in that town in the province of Guipúzcoa after a bullfight. Now in the Félix Valdés Collection, Bilbao,1 it features the buildings in exactly the same position as in the final painting, with the temporary wooden tiers assembled, but completely devoid of people. All alone in the sand is the corpse of a horse disembowelled by a bull during the bullfight.

After his marriage Zuloaga moved to Segovia, where he finished the canvas, filling it with women – in mantillas and Madrid-style fringed shawls, holding fans – and Segovian folk of all kinds – so creating a rather striking anachronism that somehow makes the painting even more uniquely attractive.

This painting also sums up perfectly the aesthetic views that shaped the artist's personality in his early years and were to remain with him to the end of his career. Thus, already present in this painting are factors as decisive to Zuloaga's production as urban landscapes with monumental buildings from different parts of Spain intended to be featured in their own right or to form part of the backgrounds in his portraits. Furthermore, the canvas reveals his interest in the different types of folk which he captured with sincere, sometimes extreme realism, while in some cases underlining their nobility despite their poverty – as was consonant with the basic premises of the current of thought of the Generation of ’98, which Zuloaga had assimilated totally. Finally, the decisive importance of Goya's influence on his art is splendidly evident. For example, his interest in bullfighting (an essential factor in the Basque painter's production both in scenes such as this and in the large number of portraits of bullfighters) and in the reflection of the gorier aspects of bullfighting, such as the dead horse with the burst abdomen (which appeared in the preparatory painting) to the far right in the picture. Here, however, that influence is patent above all in Zuloaga's premeditated choice of black for its dramatic effect in shrouding the festive scene in a sombre, almost mournful atmosphere, accentuated by the use of an extremely sober palette. It also served as a reflection of Zuloaga's pessimistic view of that España negra of the "Black Legend" – a view shared by his contemporaries, the painters Darío de Regoyos and Ricardo Baroja.

This painting is also special in the artist's production because of its composition and format, as urban landscapes by Zuloaga with figures that are academic or Pussinesque in scale are extremely rare.

What is quite evident, as Lafuente pointed out, is a lack of compositional unity in the painting, not so much among the small figures in the background or the buildings as the figures in the foreground, apparently intended to be viewed individually but then almost crammed into the composition. However, this gallery of folk arranged like a frieze in the plane closest to the spectator is a foretaste of the methodology in Zuloaga's mature production in this particular field: artistically, some of the figures in this gallery are extremely beautiful and illustrate Zuloaga's exceptional talent in this genre in which he was to produce several masterpieces. Evident also are a number of anecdotal details, like the labourer wooing a group of girls who lean over the balcony of the white farmhouse in the background, or the improvised "royal box" with a national flag serving as a heraldic banner.

This diverse, independent treatment of the different elements in the composition infuses the painting with enormously thought-provoking artistic potential. It reveals the young Zuloaga displaying his skills, showing that he is capable of including a huge number of figures in movement in a panoramic urban landscape, while endowing almost all with some point of interest.

The picture is listed as no. 25 in the painter's handwritten inventory (now in the family archive). Furthermore, the Museo Zuloaga archive in Zumaya also contains a photograph of this painting signed by the artist and bearing an inscription which translates as: "Paint in a village where there are old houses in the same style as these in Eibar: a large setting and put in a village-style bullring (for example cretonne) and then some small bullfighter figures / Une course dans mon village."