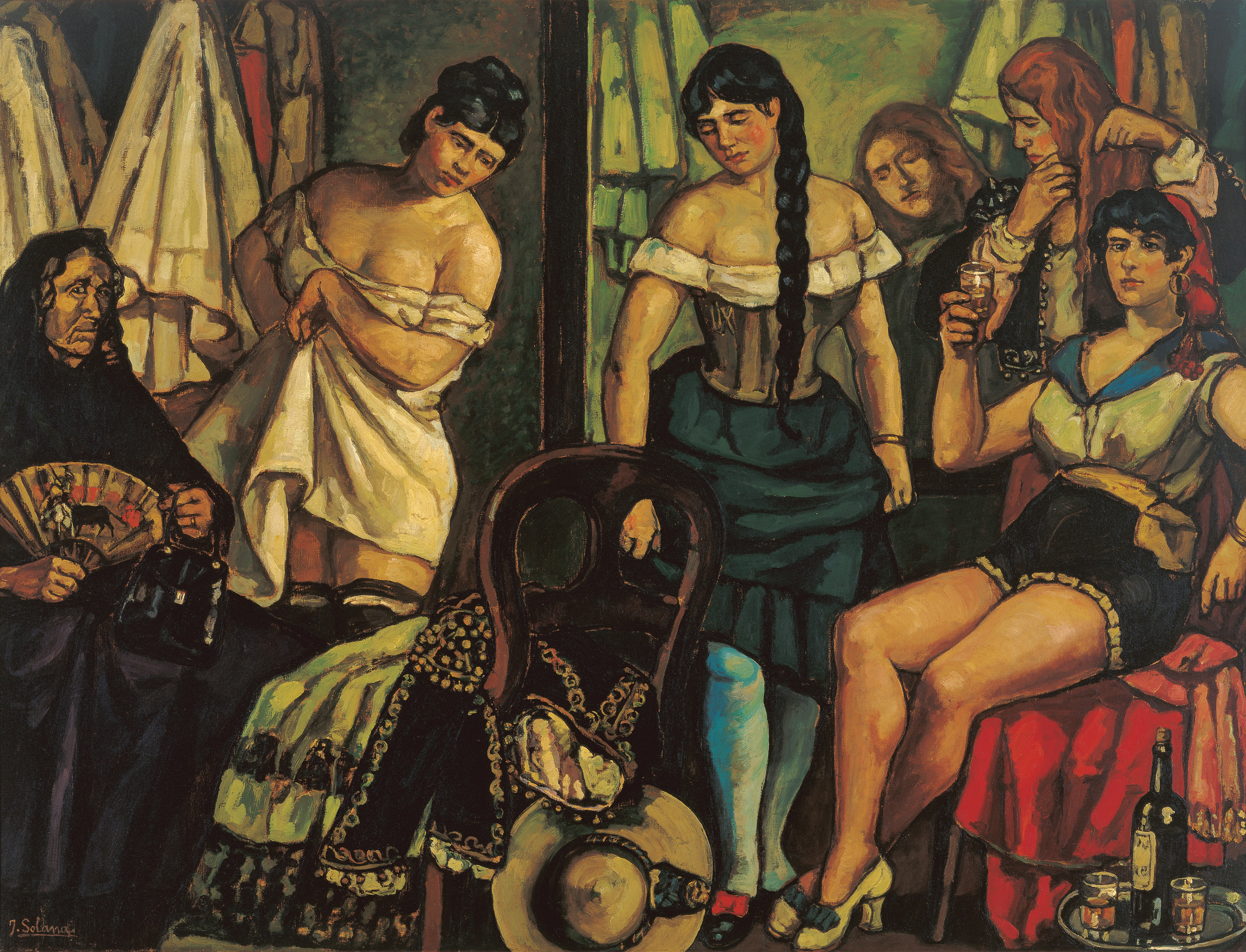 The theme of chorus girls appears several times in Solana's paintings after 1915 (Museo Nacional Centro de Arte Reina Sofía, Madrid). Around 1925, he painted Las coristas (Coristas de pueblo) ["The Chorus Girls (Village Chorus Girls)" – Museu Nacional d'Art de Catalunya, Barcelona] and during those years various works with a similar motif, especially prostitutes, those "ladies of the night". Chorus Girls in the Museo Carmen Thyssen Málaga Collection is linked directly with the theme of prostitution via the "madam", who sits dressed in black on the left, fanning herself and clutching her (money?) bag very tightly. This is also a subject typical in literature, the scenes being very close to those depicted in paintings. However, stories are only rarely (strictly speaking almost never) used as sources for pictorial art. The last chapter in the second series of Madrid. Scenes and Customs (1918), entitled The Chorus Girls, can be compared to this and other, similar paintings.

Solana stressed the more sordid aspects of everyday life, particularly connected with the world of eroticism and sex. In this composition, he placed his characters in "a fleapit in the slums" with the performance over and the splendour of the show almost gone (with what little there was) and dirt and squalor everywhere. In this painting he has laid the characters out before the spectator as if in some kind of frieze – just as he would with the objects in a still-life, or a gathering of intellectuals in the Café Pombo, or a group of villagers. And although he links some figures with others anecdotally through looks or gestures, each retains a certain independence from the others, as if the artist were dealing with "things": the women are things, as are the costumes they wear for the show – prominent at the centre of the picture on a chair, or beneath the girl on the right, or hanging at the back – in a reference to Spain's "typical" regions, which the chorus girls must have parodied during the performance.

The space in the scene, strewn with all kinds of objects, is closed by the plane of the background, bringing the image closer to the spectator. Thus the impression of a frieze is even stronger and the importance of examining the figures greater: the chorus girls are before us, posing for us. The sharpness of the outlines, the forcefulness of the objects and the brilliance of the colours intensify the material presence of the women and the sordid space around them; a space all the more striking for its contrast with the sumptuousness of the flesh and the bodies, the fabric of the shirts, bodices, boleros... and with the sensation of absence in the figures, who say nothing, who just sit or stand there for us to look at.

Solana painted Chorus Girls during the most prolific and rigorous period in his career, within the framework of a thematic repertoire which allows us to see his vision of Spain: workers, ladies of the night, religion, bullfighting... And this painting brings together some of those aspects in an apparently arbitrary way: bullfighting on the fan, regional diversity in the dresses, work in the form of the woman on the right dressed as a sailor from Santander, the bottle, the glasses... In this way, just as Azorín, Pío Baroja and indeed the artist himself had done in their early days in the literary area, Solana created diversity in a world close and also new. Although steeped in the España negra or "Black Legend" cliché, strictly for artistic reasons avoiding indulgence or sentimentality, Solana's picture is not a cliché in itself.