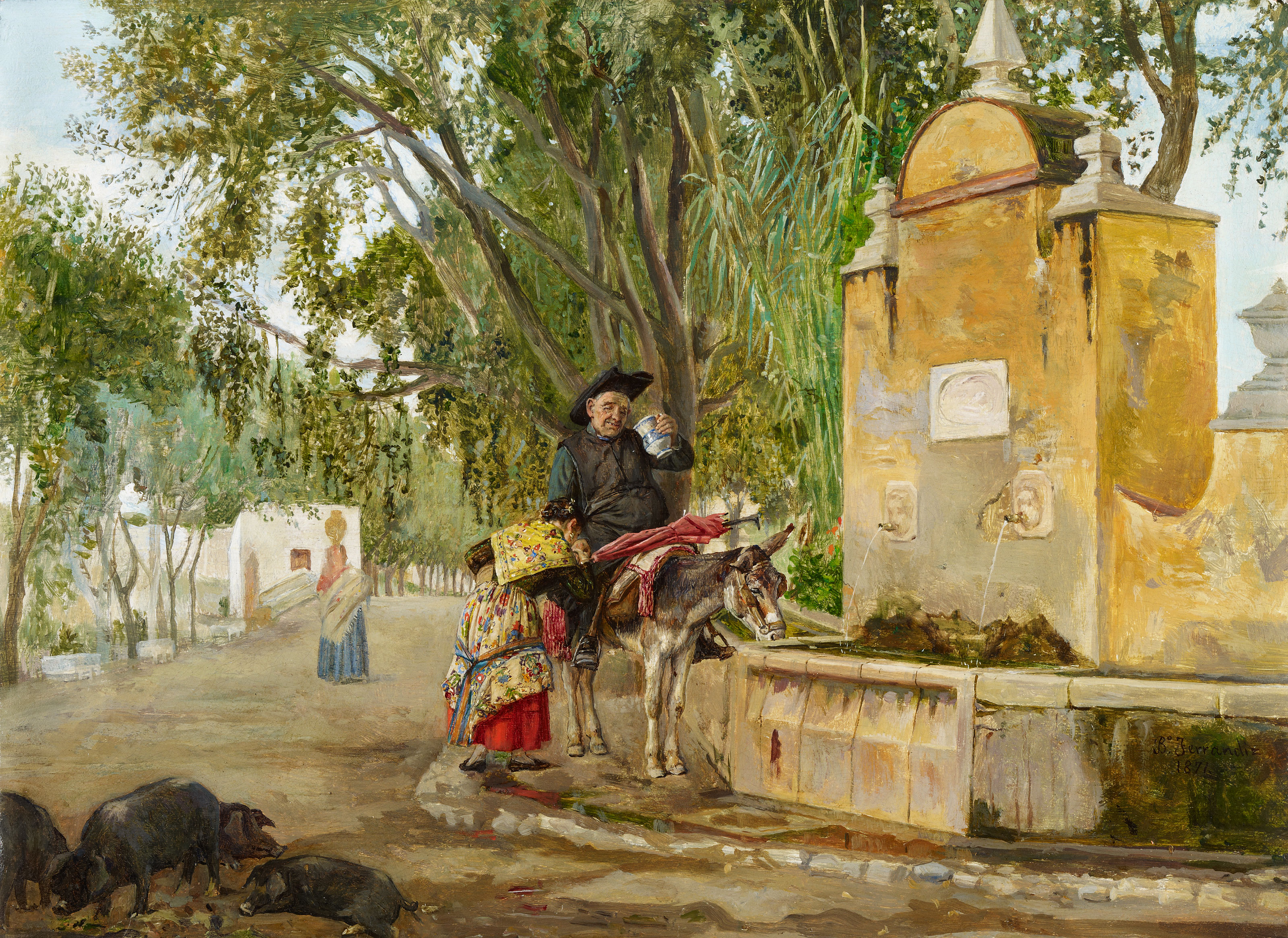 Charity and Love of God

Ferrándiz was in the habit of photographing his works and put together an album in which many of the photos feature annotations on the paintings.

The album, now in the González Martí archives in Valencia, contains a curious annotation referring to the photograph of the present work: “Painted in 1871 and acquired by Goupil. It is perhaps the least bad piece I have painted as to colour.”

This small panel painting was painted in Malaga two years after he arrived in the city, although the scene is set in his native Valencia, as indicated by the clothing of the young woman who comes up to kiss the priest’s hand.

Ferrándiz makes use of light, probably that of Malaga, to work the picture surface. The rich, vivid colour captures the ambient light and the resulting effects were to the artist’s satisfaction, as evidenced by his comment.

Despite this concern with trueness to life, the composition is based on academic structures as the main figure, the priest, is located in the centre of the composition within a pyramidal structure in accordance with the concept of the sublime, in reference to his religious rank; the scene furthermore features an architectural landmark, the fountain, in the foreground with a significant presence; and on the left are a rural architectural structure and a typical figure from everyday life.

It is undeniably the patches of colour and rich, well-chosen palette that structure the picture surface, infuse it with vitality and make this small, unambitious work an example of the painter’s mastery.

Ferrándiz, who was contractually bound to dealers such as Goupil and Baron, was forced to produce works on commission for collectors, who usually established the themes, figures and settings. Compositions of this kind, usually in small format, therefore account for much of his oeuvre.

By the time he painted this picture he had visited Fortuny in Granada and had subsequently travelled with him to Morocco. These circumstances are reflected here in the influence of the Catalan master who guided his oeuvre and that of other followers and admirers, as Ferrándiz faithfully captures the variations in light and uses whites in the mixtures to enhance the luminosity of the chromatic effects.

However, Ferrándiz was no ordinary follower of Fortuny; his tight brushwork denotes not so much preciosity as an academicism with a strong classical background which he learned from his masters at the San Carlos School of Fine Arts in Valencia and retained throughout his entire career.

Where he does follow Fortuny is in his taste for pleasant scenes supposedly taken from everyday life, although he never goes back to the 18th century or takes Goya as a model. He preserves the practices and customs of his native Valencia and rarely sets his compositions in other places. Of the works produced during the seventeen years spent in Malaga, only three or four themes are inspired by Andalusian or local customs.

Before sending Charity and Love of God to Goupil in Paris, he showed it in the fan shop in Calle Granada opposite the convent of El Ángel, as reported in the 21 November 1871 issue of the daily El Avisador Malagueño. This was a common procedure used by painters to give publicity to their works and, in Ferrándiz’s case and owing to the respect he enjoyed in Malaga, to disseminate this model of eclecticism based on Fortuny, which he was determined to make fashionable in Malaga.

There can be no doubt that Ferrándiz succeeded in his endeavour, as it became common practice for Malaga painters to set scenes around a fountain. We might recall the local Reding fountain which was studied by Guillermo Gómez Gil, Moreno Carbonero and Murillo Carreras; the fountain is an icon of the street furniture of Malaga as it embodies the use of local colour as a testament to the city’s urban or social progress.

Like Ferrándiz’s fountain, the square structure and wide parapet, shown in perspective, mark the axes along which the figures are arranged and provide a setting for a genre scene, the stop made by Ferrándiz’s priest. The literary title, Charity and Love of God, stresses the aspect of exemplary behaviour in order to add the required substance to the theme of this eclectic and commercial painting.

Charity and Love of God