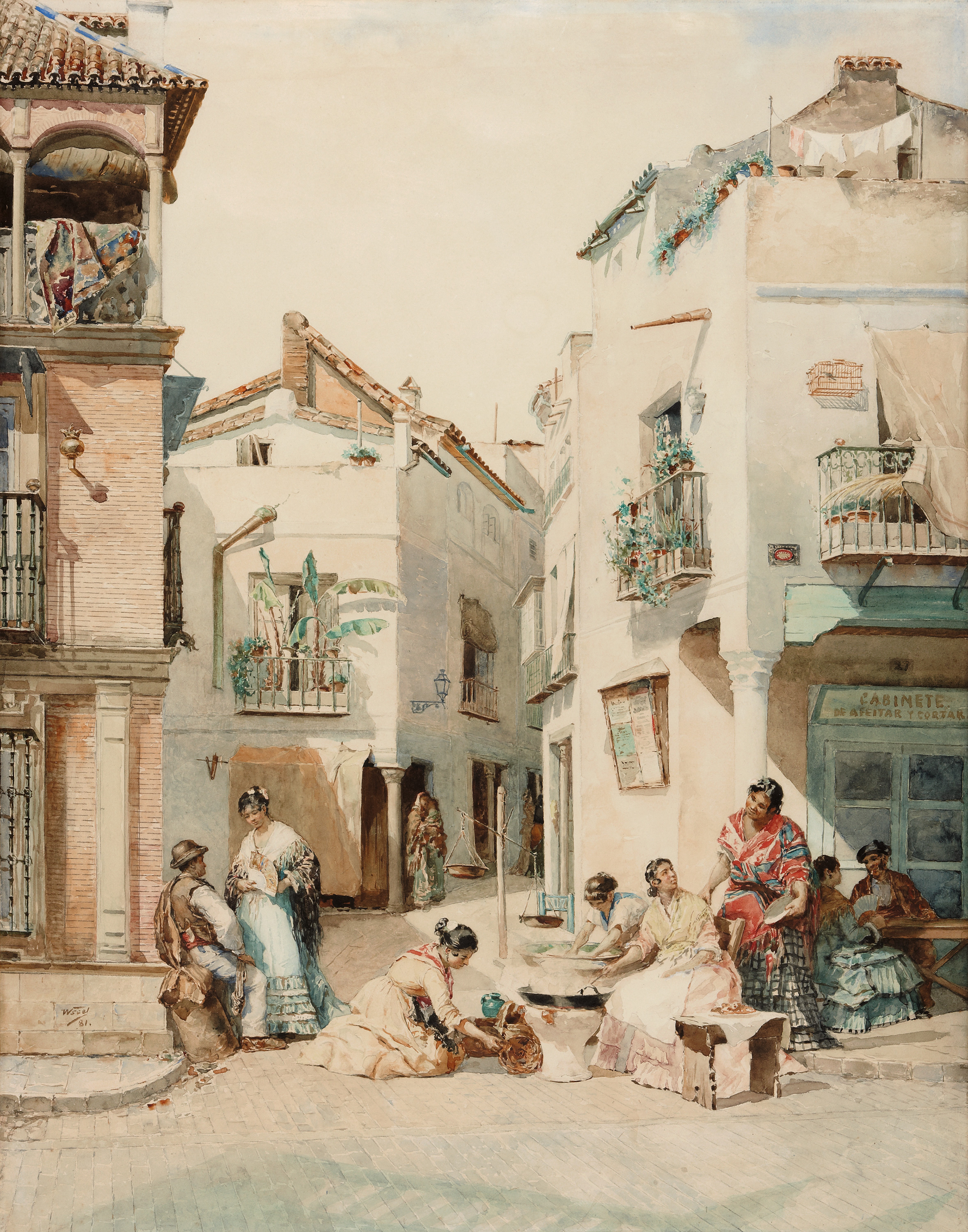 This watercolour painting shows a stall selling the ring-shaped fried pastries or doughnuts known as rosquillas, a motif depicted by many Andalusian painters, among them José Domínguez Bécquer, Manuel Cabral Aguado Bejarano and Manuel Rodríguez de Guzmán. The work, which forms a pair with the following painting, is an almost exact replica of one on canvas in this collection entitled Rosquilla Sellers, also painted in 1881. A street sign that features in the version on canvas but is absent from the watercolour allows the spot to be identified: Calle Conteros in Seville. Some of the advertisements on the notice board can be made out in the oil painting: on the left, those of the boats “Segovia” and “Lafitte” and on the right a Seville bullfight poster “Toros en Sevilla”. Other details are also missing from the watercolour, such as the bowl lying on the stone paving on the right and the barrel beside the figure on the corner, although it displays some new features not present in the oil painting, such as a pinnacle and smaller roof above the main roof of the left-hand building.

The composition is framed by two buildings. The one on the left with brick walls has railings, a balcony and a gallery of diminished arches and the one on the right, with whitewashed walls, has a painted green wooden lintel and Corinthian column at the corner and a barber’s shop on the ground floor, as indicated by the sign displaying the words “gabinete de afeitar y cortar” [cabinet of shaving and haircutting]. In front of the background house, also whitewashed, the painter thus creates a setting that is almost a theatre backdrop, to which he incorporates, with a naturalistic sense of observation, the shadow projected by the balustrade with the pinnacles topping the building on the other side of the street next to the cathedral. The groups of figures are clearly arranged in the space delimited by the buildings. At each end are courting couples, the women holding open fans. The figures in the centre are busy at work making rosquillas: a young woman next to a green glazed and fluted liquor flask, most likely from Úbeda, and a small dish of flour kneads and shapes the dough in a larger green-decorated earthenware bowl, probably from Triana; another woman, whose dark features indicate she is a gypsy, as doughnut sellers commonly were, fries them in a pan over a portable stove whose fire is fanned by a third woman using a blower made of esparto matting, while another gypsy woman stands holding a white earthenware plate that will be placed next to the one filled with wares on the small portable table. In the middle ground, behind the scales for weighing the rosquillas, a poor woman holds a child and, at the far end of the street, a pair of elegantly dressed young bourgeois women disappear from sight, as if exiting the stage. The doughnut sellers with their colourful shawls and traditional Andalusian dresses stand out among the figures for their beauty.

The buildings located on either side of the street and those disappearing from sight at the far end are depicted in great detail – not only with their architectural features but also their more picturesque elements added by the artist, such as the plants and flowerpots on the balconies, the Palm Sunday palm branch, the birdcage, the awnings, the tapestry or rug draped over the fretwork balustrade of the upper gallery on the left and the clothes hung out to dry on the right-hand terrace. The artist skilfully combines everyday and cultured elements, succeeding in conveying the particular charm and harmony of the city. The delicate hues of the watercolours soften the contrasts between light and shadow that are more intense in the oil painting.