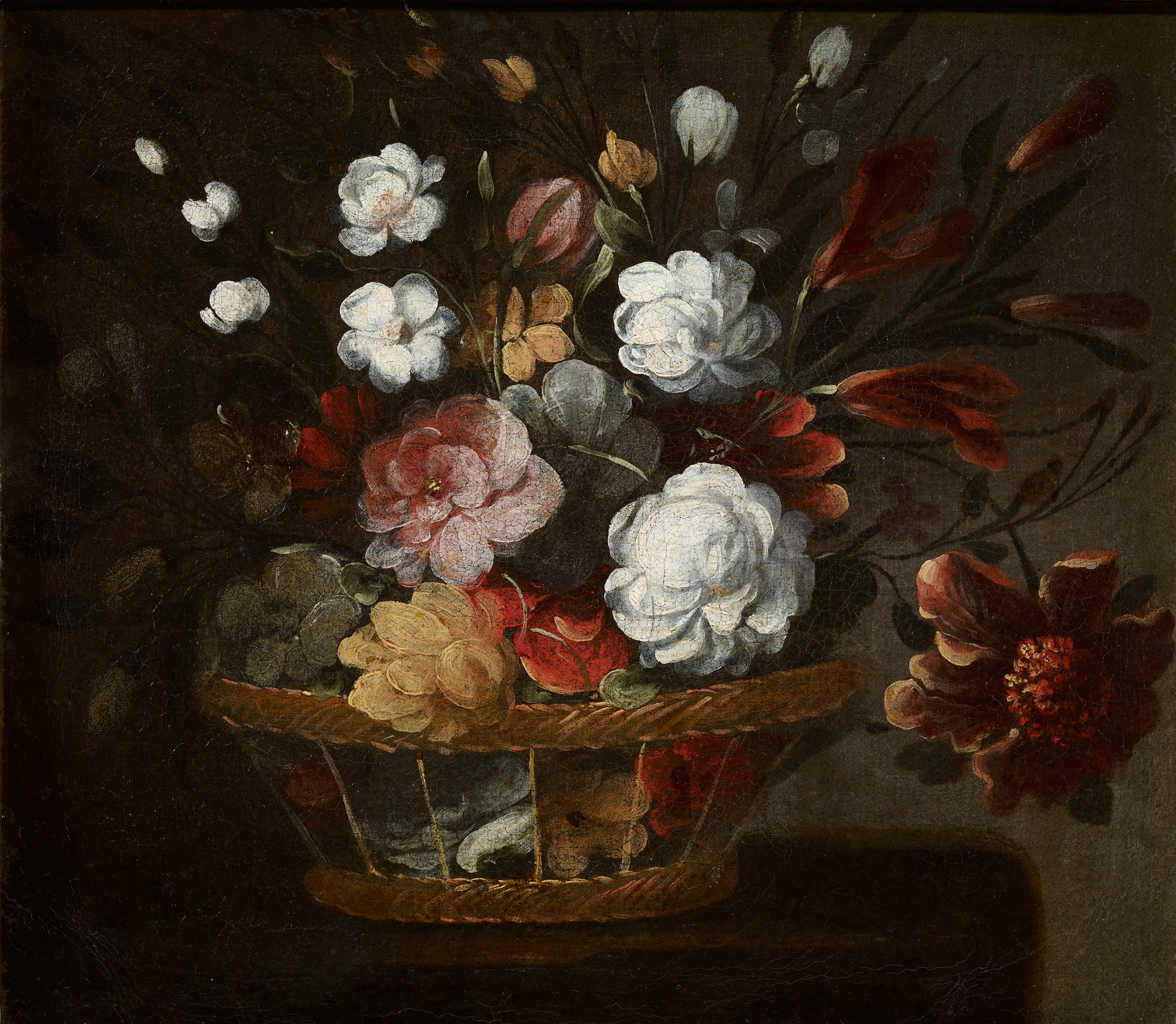 Diego Valentín Díaz’s still-life paintings are little known. There are no documentary references to commissions of this kind – which is not surprising as they were considered a lesser genre at the time and were often produced by artists’ studios to be sold subsequently rather than commissioned by clients.

The paintings listed in his will include a few flower paintings, possibly executed by him, and the inventory of 1661 mentions a book with forty-four flower prints, which suggests that he devoted part of his output to these themes. There are currently two paintings of vases of flowers in Valladolid cathedral, another two privately owned still-life paintings of flowers and a few examples on the art market. The scholars who have dealt with Diego Valentín Díaz’s devotion to this theme consider the flowers in vases in the large painting on canvas that the artist executed for the refectory of the convent of Portaceli in Valladolid to be precedents and an indication of his interest in such depictions.

Most of the earliest examples of flower paintings that arrived in Spain – especially in court circles – from the Flemish school at the beginning of the 17th century were executed by Jan Brueghel (1568–1625). The first Spanish painter to incorporate flower paintings into still-life scenes was Juan van der Hamen (1596–1631), but the artist who established them in their own right, independently of still-life scenes of foodstuffs, animals and pots and pans, was Juan de Arellano (1614–76), the most influential practitioner of flower painting in the Iberian Peninsula during the central years of the century.

These themes, whether depicted singly, in pairs – as here – or in series, were designed to decorate the homes of noble and wealthy families who wished to embellish their residences with decorative, pleasant and colourful paintings, as the main purpose of these pictures was ornamental. Díaz, who was active in the rich and noble city of Valladolid, which had been the seat of the court at the beginning of the century, must have had a clientele who commissioned paintings of this kind. Although in his main area of activity, religious painting, he was conservative and showed little evolution when it came to incorporating the novel features of the Baroque language into his style, his flower paintings reveal his knowledge of Flemish art and of the new genres in vogue during the period.

These two works display a very similar composition consisting of a wicker basket containing a bunch of flowers – roses, tulips, irises, hyacinths, daffodils, among others – on a table. It has been stated that the artist’s paintings display a delicate, precise style and these qualities are apparent in these two paintings, in which he plays with the effects of lights and shadow to create spatial effects.

The rich and varied colours, which stand out against a somewhat darkened neutral background, and the movement of the forms emphasise the decorative nature of the paintings, which is also accentuated by the highlights on the central area of each bunch. This concern with ornamentation replaces the more static and conventional models of the early decades of the century and also recalls the influence of more decorative paintings of Italian origin with which Díaz may have been familiar through prints, as well as allowing the two works to be dated to the middle of the century. In this connection it is also possible that he may have been familiar with works by Arellano, whose art reached its height of development in the 1650s.