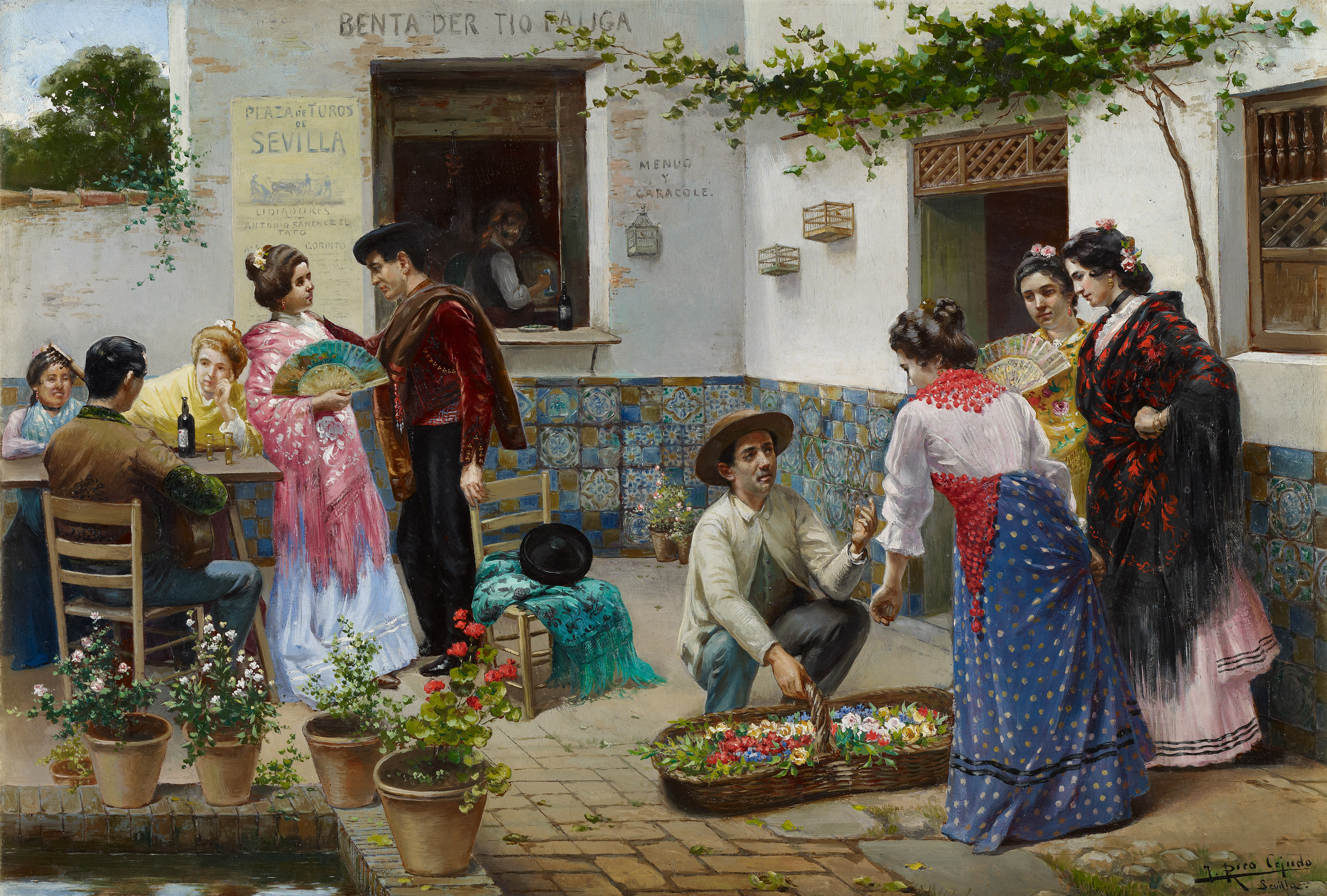 Andalusians at the Country Inn

In a typical Andalusian courtyard two groups of people adopt different poses with a certain studied symmetry based on an imaginary diagonal plane that runs from the corner of the pond in the left foreground to the corner of the courtyard. In the right foreground Rico Cejudo depicts a crouching flower seller negotiating with the woman in a white blouse who, like all the figures in this genre painting, is dressed in regional costume; the woman appears to be choosing flowers to wear in her hair, like her companions who witness the transaction attentively. The group further away on the left is made up of people engaged in friendly conversation. The last figure, who is barely visible, is hinted at in a dark interior through the window in the background.

The local flavour of the setting is conveyed by a variety of details. Some are architectural, such as the traditional tiled panels that are so similar to those painted in another of his genre paintings, La visita del cura (“The Priest’s Visit”), also reproduced as Concierto de guitarra (“Guitar Concert”). The greenery and vegetation are characteristic of any Andalusian décor, and in this case range from the pots of geraniums and azaleas and the vine climbing the wall to the ivy of the vanishing line in the landscape that begins in the opening of the wall in the upper left corner. The wooden lattices and birdcages on the whitewashed walls convey warmth. All these features are characteristic of the traditionalist and genre style practiced by his master García Ramos, whose influence is evident here. And even the paving stones and the inscriptions on the walls, both that of the bullfight poster (“Plaza de toros / de / Sevilla/ lidiadores / Antonio Sánchez el / Tato / ... Gordito”) and the graffiti (“Benta der tio fauga”, “Menuo / y / caracole”), devices also sometimes employed by García Ramos, reinforce the sensation of a setting that is lived in, a space that is used.

The setting of these scenes in Andalusian courtyards – we might recall also La Buenaventura and other similar works – or similar spaces such as a roof terrace (as in the aforementioned Visita del cura) also brings to mind what Quesada1 has to say about the use of such settings, even the garden, as backdrops to family and neighbourly celebrations, weddings and christenings, May Cross festivities (themes also dealt with by the painter), soirées that carry on in the courtyard and even occasional street vendors, all subjects highly suited to this genre of painting. Indeed, the criticism that his master José García Ramos – who is almost the master of scenes of Andalusian customs par excellence, a title which could likewise be extended to his pupil Rico Cejudo – created a false Andalusia as portrayed in the literature of the Álvarez Quintero brothers loses all its weight if we consider that, although there was indeed a tragic Andalusia of social strife, there was also an Andalusia of May Crosses, courtyard gatherings, priests at mass, hotpots and hot chocolate or glasses of sherry, and it was this appealing familiar Andalusia that he captured on canvas. In other words, Rico Cejudo resembles García Ramos in his joyful nature and in his love of Seville. Or, as the painter Virgilio Mattoni2 would also write of Rico after describing him as a scintillating and amusing “reminder” of García Ramos and a painter of joy and movement, that his paintings smell of “fine Manzanilla sherry”.

Andalusians at the Country Inn