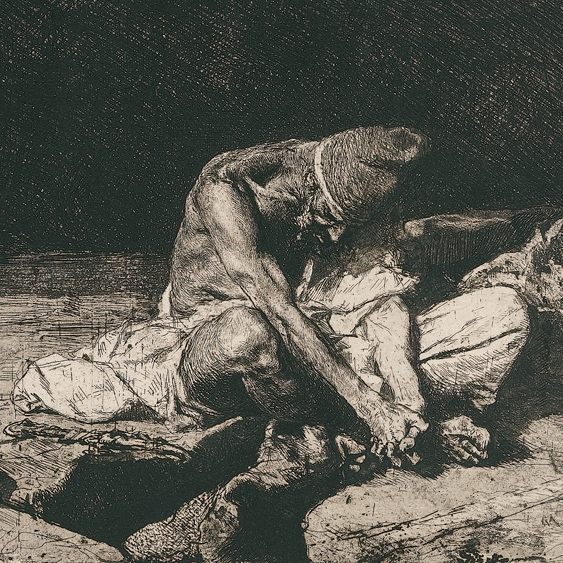 Following in the wake of other great painters and printmakers such as Rembrandt and Goya, Mariano Fortuny y Marsal (1838−1874), an unquestionable master of Spanish nineteenth-century painting, put his virtuosic skills to exploring the expressive possibilities of printmaking – chiefly etching and aquatint – in 30 or so compositions depicting Orientalist themes, customs and classically-inspired subjects. Their fine quality makes him the most important Spanish printmaker of the second half of the 19th century.

In 1860, having produced a few illustrations for books in the previous years, Fortuny began making independent prints after his first trip to Morocco. Himself a collector – of prints by Rembrandt, Ribera and Goya, among many other art objects and antiques – he published only a few of his own during his lifetime through Adolphe Goupil, his Parisian dealer from 1866.

Although printmaking was a sporadic and secondary activity for Fortuny – he practised it at night, as his first biographer Baron Charles Davillier recalled in 1875, and as part of a commercial contract with his dealer – his etchings, an eclectic group of works created in barely 10 years, are a first-rate artistic corpus. Giving free rein to his creativity, the artist produced his most personal and experimental output in which, as his friend and devoted admirer Théophile Gautier pointed out, ‘he lends a mysterious and fanciful appearance to the truest reality’.

This exhibition brings together the artist’s main prints, which come from the collection of Enrique Juncosa Darder. They attest to his technical mastery at imbuing his graphic work with subtle painterly effects, his imaginatively devised compositions, and his attention to detail – the result of his painstaking work carried out on the original plates, seeking the desired effects through various state proofs.