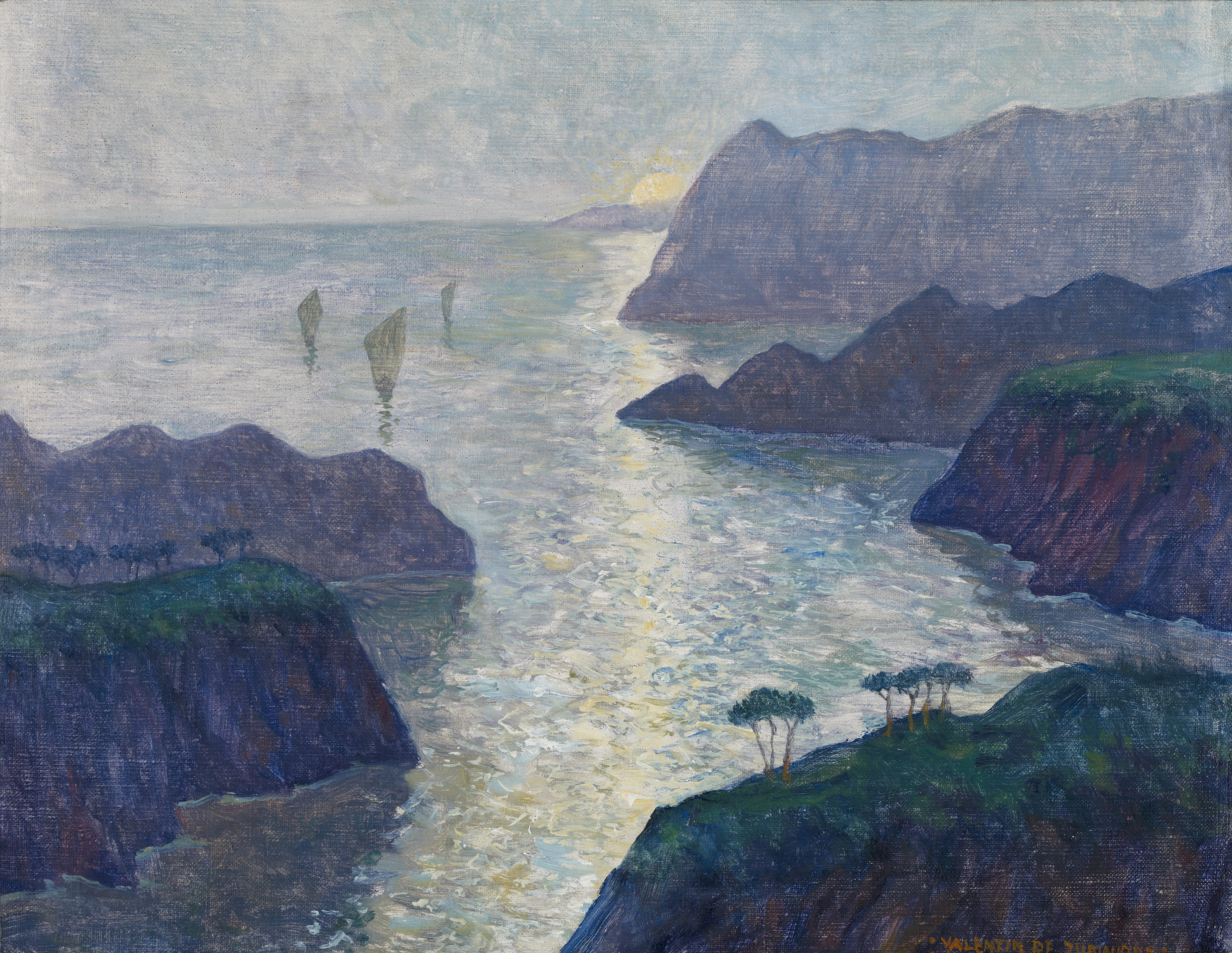 Although Valentín de Zubiaurre was predominantly a painter of figures and portraits, he also produced landscapes and a number of still-lifes. This painting depicts a stretch of the Basque coast (perhaps near the mouth of the Guernica inlet, viewed from the environs of Mundaca, which is relatively close to Garay, where his family owned a farmhouse and his brother Ramón was born) in the light of dusk – although from the position of the sun, the time of day should really be dawn.

The very high horizon emphasises the elevation of the composition, with the reflection of the rays of the sun, as it slips behind the last portion of coast, serving as a vertical axis. The sails of the three boats approaching land and standing out against the sea are counterbalanced by the two groups of pines silhouetted against the water on the cliff in the foreground. As in other paintings by the artist, the dominant colour range is cold. The thinness of the layer of paint used for the picture itself allows the weave of the fabric and part of the light-coloured priming on which the very mixed colours were applied with fine paintbrushes to be seen. The small strokes and horizontal, curved and impastoed dabs of the reflections, in which yellow ochres predominate, contrast with the continuous, vertical and diagonal, very diluted strokes of the mountains and cliffs in merging greens, greys and blues, with traces of reds. At the top of the painting, the bluish-grey line of the horizon breaks the continuity of the colour of the sea and sky. Following the fashion prevalent in most of the European art of the time, the painting was not varnished.

As Valentín de Zubiaurre painted several versions of this landscape, virtually all the same size, we should talk of this picture’s archetypal character before discussing its realism. In two of those versions (both in private collections) he retained the pine trees on the right, with small variations, but increased the height of the mountains on that side and modified the sun. In the first, entitled Acantilados ("Cliffs"), the sun is more hidden and in the second is not visible at all, although some reflections can still be seen. In other views of the coast, as in the smaller painting entitled Marina ("Seascape", also in a private collection), the differences are greater, but essentially the landscape is the same. The artist also used a similar landscape as the background to some of his large-format compositions, as for example in La merienda ("Afternoon Tea" – Museo de San Telmo, San Sebastián).

Dating this work is no easy task, since Valentín de Zubiaurre did not date most of his paintings (this and other, similar ones included), and also because he hardly changed his style – he was a painter who developed very slowly – after he had made himself a niche around 1918. However, the fact that the treatment of this painting is the same as that in a similar, although somewhat larger one dated 1950 which depicts the coast around Lequeitio (private collection), leads us to the conclusion that it dates from the late 1940s or early 50s. Furthermore, it is possible to dismiss any date in the first thirty years of the century, as it reflects none of Zubiaurre's interest in the precision of heavy outlines typical of his work from that period.