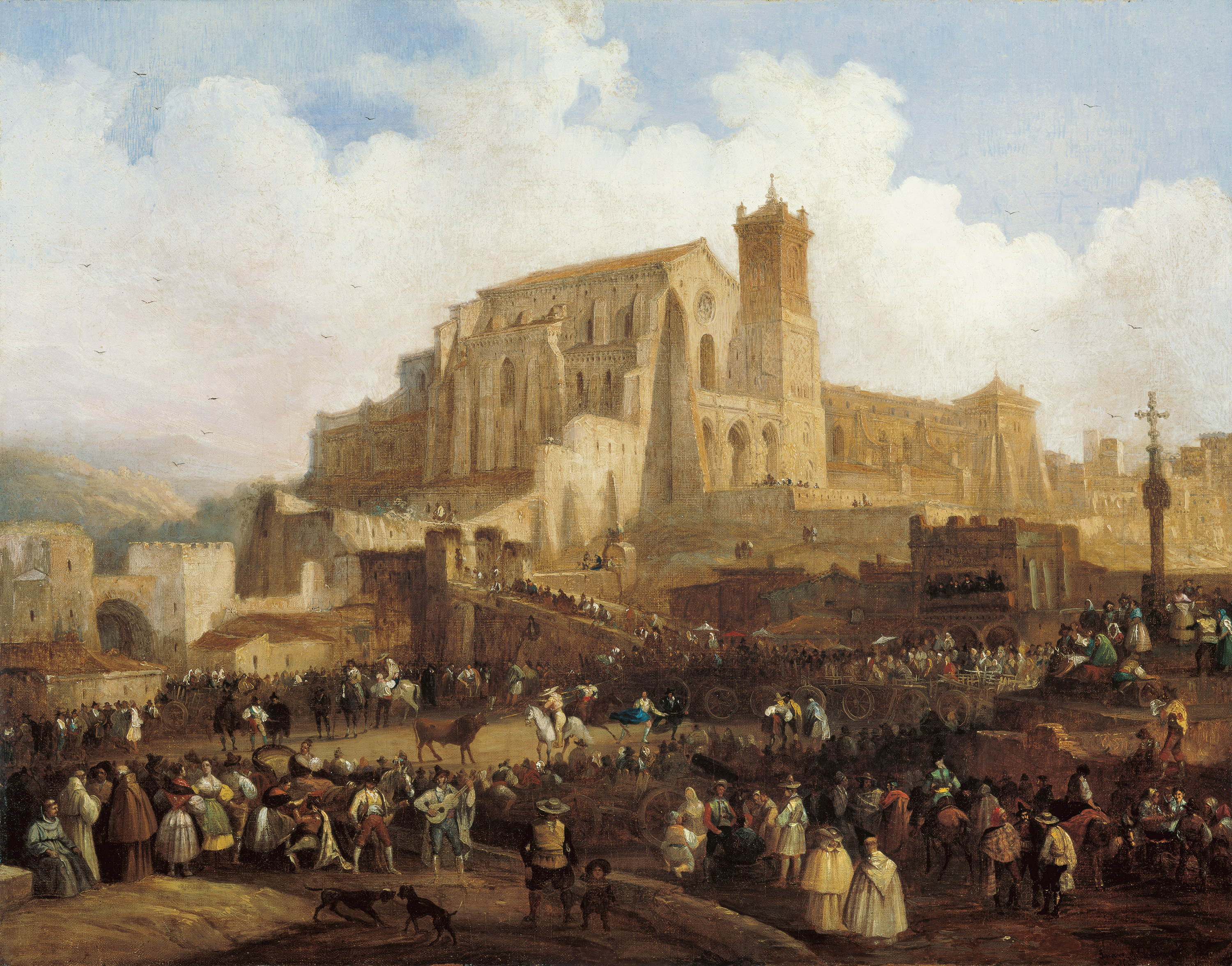 A bullfight is being held on an area of level ground outside the walls of a village beneath the imposing silhouette of the grandiose, monumental parish church with the appearance of a collegiate church that towers majestically above the scene on a small hillock.

The bullfight takes place in the centre of the ring, which is formed by wagons arranged in a circle. Watched by a bustling crowd, a picador is about to weaken the bull with his lance, while other bullfighters around him perform distracting manoeuvres. On the balcony of the building that stands out from the group of houses on the right is the presidential box in which the black-clad local authorities can be distinguished. Locals are grouped around the cross erected at the boundary stone on that side to gain a better view of the action. Meanwhile, visible in the foreground is the motley crowd of friars, country folk, ladies riding in open-topped caleches, stallholders, musicians and street vendors who take part in the festivities.

This spectacular painting, practically unknown until its recent appearance on the Madrid art market, is one of the most interesting works from the early part of Genaro Pérez Villaamil’s mature period. Dated 1838, it is undoubtedly the finest and most striking of all the paintings the Galician master produced on the same theme that year. At least two more versions are known with the same title, but they are less impressive than the present painting in composition and overall effect.

Here Villaamil puts his best skills to work in producing a monumental picturesque landscape, a genre of which he was the absolute master in Spanish painting of his day. He displays his inventive flair to the full in recreating the appearance of a non-existent village with an astonishing scenographic effect, overlooked by the impressive architecture of a church built from remnants of real architectural features that Villaamil would have sketched during his travels around Spain, later combining them in his studio with a curious eclecticism steeped in the most genuine Romantic spirit to give them a lifelike appearance. Indeed, the artist pieces the architectural elements together with surprising ease – buttresses, crenelated bastions, monumental Gothic portals, fortified doorways and Mudéjar towers – to make what appear to be Aragonese buildings that are spread all over the landscape, modelled with absolute mastery of architectural languages. Villaamil furthermore envelops the village’s various buildings in a golden glow, causing their outlines to stand out by setting them against the light and using shadows applied with the subtle tinted glazes characteristic of his style to achieve a curious appearance of reality that gives these Spanish-inspired fanciful, picturesque landscapes an irresistible appeal, enhanced by the bustling crowds who populate them. Indeed, unlike many of Villaamil’s landscapes in which the presence of the figures is absolutely secondary, here the painter gives great prominence to the festivities taking place in the village, bathing it in the first shadows of twilight so that it stands out even more powerfully against the monumental architecture silhouetted against a pale, cloudy sky across which numerous birds fly. Villaamil takes care over each of the figures, which he renders in exquisite detail in order to emphasise the most picturesque aspects of their appearance and attire, giving them an intensely folk flavour that adds to the compelling charm of the painting.